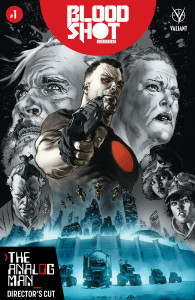 Many years from now, Los Angeles has become a post-apocalyptic wasteland and the once unstoppable killing machine known as BLOODSHOT has become THE ANALOG MAN. Hopelessly outdated, Bloodshot’s taken on a new role as the protector of a small town, eking out a subsistence existence with the great love of his life – Magic – and protecting a group of stragglers who’ve weathered the storm. But when a gang of marauders arrives, the settlement’s survival is threatened, and Bloodshot is forced to bring justice to the distorted and disjointed badlands of the Valiant Universe!
———-

Bloodshot was the perfect living weapon, a nearly indestructible killing machine powered by billions of nanites that gave him superhuman powers. Brainwashed and sent on hundreds of brutal black-ops missions by the paramilitary organization Project Rising Spirit, eventually he fought back and freed himself of his programming.

Bloodshot became a hero, fighting alongside others in the pursuit of good. He even fell in love. But violence continued to follow him, taking everything from Bloodshot- even his nanites.

When the nanites began to infect other people, the man now known as Ray Garrison took responsibility and hunted them back down, rediscovering his humanity in the process. He even learned to love again, falling for a young woman named Magic. Together, they restored Bloodshot.

Now, 30 years later, they live happily ever after…

Opening on an overhead view of a settlement, placed in the middle of the barren landscape outside of the walled city of Los Angeles, Bloodshot Reborn works to establish that things have changed over the thirty year jump. As the book progresses, we get an overview of what happened, and it ain’t nice. What was started by Project Rising Spirit, with the nanites giving Ray his abilities as Bloodshot, has evolved into something greater and much more terrifying.

Technology as the Big Bad in entertainment is nothing new. Anyone who follows our advancements has seen that Artificial Intelligence is just over the horizon. The only real question is whether such intelligence will be the kind and benevolent sort we see in Star Trek, or the coldly calculating Cyberdyne from the Terminator franchise. Valiant comics has taken that question along the path of greatest conflict, evolving the nanites from Project Rising Sun into the all-seeing, all-powerful “Goo-Tech” that controls everything behind the walls of L.A.

The Goo, as it’s lovingly called by those not pulled in by its supposed benevolence, patrols Los Angeles and keeps its residence safe, secure, and under complete control. Every facet of life is weighed, measured, and regulated. The people eat and drink as much as the Goo believes should be allowed. The streets are patrolled from above by constructs built to resemble the XO-Manowar armor, to give the people a sense of safety under their watchful presence.

As restrictive as life is in L.A., freedom can be found outside the walls, but as always freedom comes with a price tag. In this case, that price tag very closely resembles the post-apocalyptic world of Mad Max, where settlements are forced to make do with the castoff resources deemed sufficient by the Goo’s A.I. Trying to take more than the allotted ration is met with resounding force in the form of the Manowar constructs… unless you have the help of someone able to avoid their attention.

Enter Ray Garrison, aka: Bloodshot. Still carrying his nanites, the ancient predecessors of those making up the Goo-Tech, Ray is able to provide his settlement with a little more than a barebones existence. In addition, he keeps those under his protection safe from the Shadowmen, residents of the wasteland who have taken and perverted the image of the original Shadowman as their own, using it to spread fear everywhere they go. It’s these Shadowmen that swoop down on Ray as he’s making a water run. Attacking with a ferocity and determination he hasn’t seen from them in a while, the raiders bring overwhelming force to bear, and even Bloodshot’s abilities are stretched to their limits. If not for the appearance of an old ally, Bloodshot might not be able to fulfill his role as self-appointed guardian of the wasteland.

Post-apocalyptic stuff is very cool right now, thanks to the much deserved success of Mad Max: Fury Road. With the impetus of popular opinion behind them, Valiant has taken their established world and taken it into a dark and desolate place. This is the beginning of a larger story arc that looks to include all of the (surviving) members of the Valiant universe, so there are likely to be many crossover and team up opportunities. Jeff Lemire’s scripting does a fine job of summing up the events of the last thirty years, bringing us up to speed on this oppressive and gritty new world pretty quickly with the use of some introspective dialogue and flashbacks from Ray. Also, the artwork from Lewis Larosa presents the events in a way that keeps the aforementioned flashbacks from getting too confusing. More, Larosa’s action sequences are very well done, giving the hint of dynamic motion on the static page.

New readers might need to bone up on their Valiant lore before diving into the series, just to get familiar with the players and their quirks and abilities. That said, this could be a great jumping on point for anyone looking for Valiant’s more realistic spin on the people who would be willing to wear the mantle of “superhero”. Also, fans of sci-fi and the post-apocalyptic story should be able to find something to draw them in.

Final word: Valiant has had a long history of great characters and solid storytelling. Bloodshot Reborn looks like it’s going to be no exception to that fact. Take a look and let me know if I’m wrong.