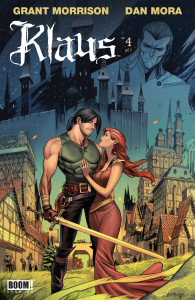 Grant Morrison is one of the most prolific and best-selling writers in comics, earning a reputation for his ability to effectively revamp superheroes like Animal Man, Batman, and the X-Men. His creator-owned titles are also highly praised, including The Invisibles, Nameless, We3, and Joe the Barbarian, because no one tells mythical stories better than him. In Klaus, Grant reimagines one of the biggest cultural myths in history, and we (Boom!) could not be more excited to pair him with one of our homegrown talents, Dan Mora (Hexed)!

Set in a dark fantastic past of myth and magic, Klaus tells the story of how Santa Claus really came to be. Where did he begin? What was he like when he was young? Why does he do what he does? How does he do what he does? And what happens when he faces his greatest challenge? Drawing on Santa Claus’ wilder roots in Viking lore and Siberian shamanism – taking in the creepier side of Christmas, and characters like the sinister Krampus – Klaus is a “Santa Claus: Year One.”
———-

The beginning of many children’s stories, almost always leading to fantastic adventures, heroic rescues, and happy resolutions. What gets forgotten is that in many cases, even the brightest of children’s stories have darker beginnings. This one starts out in the mining town of Grimsvig, with a frozen body… a mother clutching her incredibly still living baby boy. In this beginning, the legend of The Santa is born.

Yeah, I get it… It’s March, almost April, and with Easter coming up fast the last thing anyone’s thinking about is a Christmas story. For the record, this isn’t technically a “Christmas” story. It’s the story of childhood friends losing touch, of an unhappy marriage and a man reaching for power, a town fallen on the hardest of times, and the children who suffer the most through it all.

Klaus, the baby pulled from his dead mother’s arms, grows into a strong young man, and becomes a Captain in the Grimsvig city guard. He befriends young Dagmar, daughter of Lord Alrik, the much loved and respected ruler of Grimsvig. By all indications, Klaus has things going pretty well. But remember, “once upon a time” is almost never followed immediately by “happily ever after”. There are generally some bumps in the road along the way. The first bump comes when Lord Alrik’s trusted advisor Magnus poisons the ruler and frames Klaus for murder. Klaus is banished from Grimsvig, bound and sent out into the frozen wilderness, while Magnus assumes control of the city.

Move forward in time, and Klaus has returned to the city he called home. It isn’t the city he remembers, the men more prisoners than workers in the iron mines, denied even the time off to honor the annual Yuletime celebrations with their families. Lord Magnus has declared everything within the city walls his personal property, and decreed that any and all toys be confiscated from the children and turned over to his own spoiled son Jonas. Seeing the state of Grimsvig, and particularly the suffering of the children under the oppressive rule of Magnus, Klaus takes on the role of Yuletime spirit… the “ghost wolf”. The Santa. By night, he creeps over the rooftops of the city, depositing his handmade toys for the children to enjoy, in keeping with the holiday.

Lord Magnus’s wife, Dagmar, has her own problems. With no love in her marriage, she turns her focus to her son Jonas. Despite his father’s continuing attempts to corrupt the boy and raise him to love nothing but power, Dagmar tries to show Jonas that there are other things in life. In a room littered with the debris of shattered toys, all taken from the children of Grimsvig, Dagmar and Jonas take turns telling a story, imagining happier days.

Klaus isn’t so much a Christmas story as it is a story about children suffering at the hands of adults. Kids aren’t born caring about things like the lust for power and hording of wealth. Kids want to play, and in a perfect world that would be all they need. Klaus comes along and recognizes this. He takes it on himself to ensure that the children of Grimsvig are given the right to be children. Dagmar has a more personal stake in the story, determined to give her son that same chance, minus his father’s constant urging to adhere to the adage “might makes right”.

One of the aspects of the figure of Santa Claus is deeply rooted in Viking lore, and it’s that basis that’s given the spotlight. Klaus isn’t a “jolly old saint”… at least, not yet. He’s a hard man, having spent years in the frozen forest, living off the land with a white wolf as his only companion. His soft spot for children, also incidentally Dagmar, notwithstanding, Klaus still comes across as a guy you wouldn’t want to cross. Boom really is one of my favorite publishers, having nailed the art of the mini-series and using subject matter from every genre you can think of. Klaus is no exception.

So be good… or the Ghost Wolf might find his way through your window on a dark and stormy night. 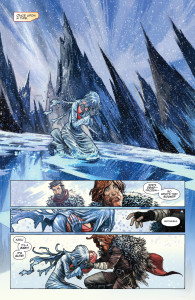 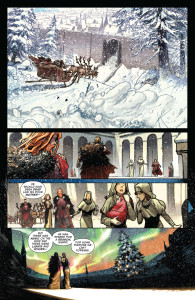 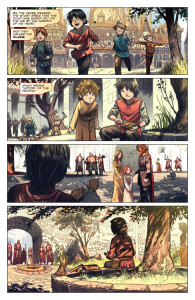 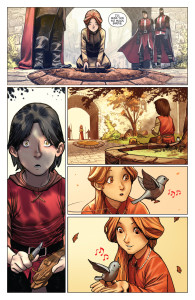 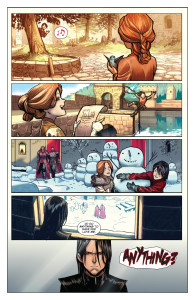