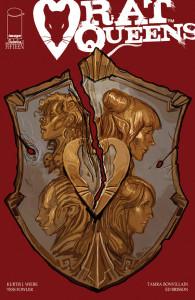 Amongst much drama and ado, Hannah has returned to her mage school alma mater. On the surface, it’s a chance to get in touch with old friends and reminisce about the good old days. In truth, Hannah has plans to free her father, who’s been imprisoned by the school’s council of mages for an attempted coup of the school. This issue sees the results of keeping too many secrets from her friends. Dee’s brother Senoah has leveled many accusations against Hannah, most of which seem centered on her own expulsion from the college of magic.

For her part, Hannah remains every bit the rebel. She chafes at the concern shown by her friends, Betty, Dee, and Violet, over the questions Senoah’s accusations raise. As in most things, the best lies contain just enough truth to lock in believability. So the next question raised over the whole thing is, why would Senoah lie about the whole thing to begin with? When push comes to shove, the Rat Queens are committed to each other, no matter what… but that ideal is tested when one of their number seems determined to shove them all away.

The Rat Queens are unique in their simultaneous adherence to, and thumbing the nose at, the conventions of fantasy fiction and role playing games. According to the writer and creator, Wiebe, the whole idea was written as an homage to his younger days playing Dungeons and Dragons. The fact that his foul-mouthed, prone to violence and thievery, group of heroines has received both critical praise and success in publication is another indicator of what I’ve known for a couple years now:

It’s the Age of the Geek.

So, who are the Rat Queens? As featured in this issue, we’ve got Hannah, the angst ridden punk rock elven mage, born of necromancers and having demonic connections. Next is Betty, a Halfling thief who’s just as happy to steal a pouch and find it full of magic ‘shrooms instead of gold coins. The dwarven warrior Violet, who as a young dwarfling committed the penultimate sin of shaving her beard, way before it became cool and hip to do so (sidenote: Vi’s recently started letting it grow in again… when she found out that “everyone was doing it”, shaving just didn’t seem all that rebellious anymore). Last but not least is quite possibly the most interesting member of the group. Delilah, Dee to her friends, is of all things an atheistic cleric. Her magic is powered by her belief, like all clerics, but her belief isn’t so much in any theological entity or power, but in her belief in herself as a powerful and authoritative woman. Well, most of her power, anyway… She has discovered a pretty iron clad belief in the god worshipped by her people, after coming face to face with his many tentacled, C’thulu-esque aspect in previous issues.

Written with a great “ear” for tongue in cheek dialogue, Kurtis Wiebe has created a great little mini-universe inside of the established and oft-imitated world of D&D. I don’t think anyone would ever accuse the Rat Queens of excessive heroics, but there’s no doubt that as a team of adventurers plagued by authority issues, these ladies have done the implausible… With solid writing and a pedigree of outstanding artists (including one of my personal favorites Stjepan Sejic, who you should be checking out on Switch, as well as his original Death Vigil), the Queens have made a wide spread critical hit out of a book that should by all rights have had a pretty specific niche audience.