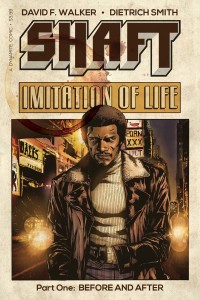 After a high profile case that put him in the headlines, private detective John Shaft is looking for something low profile and easy that will keep him out of the spotlight and out of danger. Shaft takes a missing person case that proves to be more difficult than he initially thought. At the same time, he is hired to be a consultant on a low budget film that may or may not be based on his life, and proves to be as dangerous as any job he’s ever had. But when there’s danger all about, John Shaft is the cat that won’t cop out – even if it means squaring off against sadistic gangsters that want him dead.
———-

When you’re a private investigator working the streets of New York, you’re only as good as your reputation. When your last paying job was to find and rescue the kidnapped daughter of Knocks Persons, the notorious Godfather of Harlem, that reputation can get a little overwhelming. Okay, maybe for normal folk, but when your name is John Shaft, there’s no such thing as overwhelming.

When he’s approached by the Prossers, who want to hire him to find their missing son, Shaft is hesitant. After hearing their story, Shaft is convinced that the young man hasn’t so much disappeared as he has just plain run away. Being over the age of 18, the police won’t list him as a “runaway”, and given Mike’s special circumstances most other private investigators have flat out turned the Prossers away. Being homosexual in the early seventies, there weren’t many places one could go to find acceptance, and Shaft’s initial impulse was to follow the lead of his peers. A young man trying to find his place on the streets of New York City could very easily find it, for better or for worse, and anyone trying to find him would spend a lot of time running in circles.

And there’s the hook that drags Shaft into the case… a young man trying to find acceptance in a society that has not accepted his complicated disposition is going to need all the help that he can get, particularly if he’s been more or less untouched by the negative elements of that society. Who better to come to the rescue than John Shaft?

This is a story that digs deeply into the oft-utilized “seedy underbelly” of the big city, and some pretty dark themes are pegged. Dynamite takes character who’s already firmly entrenched in the realm of modern legend, who’s known to take up the cause for society’s castoffs, and make him badder than ever.

Written as the hero of a series of books, followed by a successful series of movies (television appearances, parodies, hit songs, and now comic books), John Shaft was set to be the African American version of James Bond. Not content to sit in the shadow of England’s favorite fictional son, Ernest Tidyman’s character created a niche all his own. It’s important that our younger readers keep in mind that this series isn’t following the character portrayed by Samuel L. Jackson in 2000, but the original played by Richard Roundtree back in 1971 (history is fun, kids). It’ll be interesting to see how this story moves along and maintains its relevance with today’s headlines.

As for Shaft himself, I’m not too worried. After all, he is a bad mother–