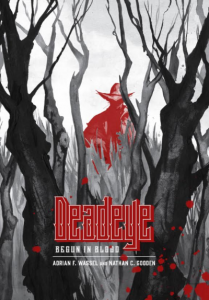 Deadeye: Begun in Blood
Writer: Adrian Wassel
Artist: Nathan Gooden
Years after his family’s brutal murder, Deadeye goes in search of the gang responsible. When he discovers that someone else has gotten to them first, he tracks a violent killer named Four Pistol Pete to the end of the railroad lines. Striking a deal with another gunman, Colonel Mason Cole, Deadeye, Cole, and a young tagalong named Lucas cross paths with a true monster. Driven by vengeance and hatred, Deadeye pushes further West to find answers and a crowning mark for his revolver. What he stumbles into is a depraved game, played by uncanny criminals looking for a way off Earth—our home, but their prison.
———-

“It starts with the unseen nudge, as all art must. A whisper… Stealing through the trees. Setting things in motion. Moving them toward the climactic moment of creation.

“ The flick of a brush. The scribble of a pen. The birth of a monster.”

I’m a fan of the classic Western story. Louie Lamour. Sam Peckinpah. John Wayne. I have memories of getting up on Sunday mornings to watch old reruns of The Lone Ranger and The Cisco Kid. The old stories are some of the best, and it’s a shame that the genre has been sort of hit or miss lately, at least as far as movies are concerned. Oddly enough, I’ve found several dips into the days of yesteryear finding fertile ground in the comic book medium, and they’ve been some of the best and most original stories told.

Is that odd, thinking that stories about a historical era long gone, in a story telling genre that’s been more or less shelved, could even be remotely new and unique? Well it’s true… and I have a theory if you’re willing to settle in and listen to it for a minute. Ready?

Comic books allow creators to take something old, something that might’ve been told and re-told ad infinitum, and toss in a single element that takes into new territory. We’ve seen it over the years, to varying degrees of success… Cowboys and Aliens, Jonah Hex, The Sixth Gun, High Moon. All stories grounded in the Old West, with the Weird thrown in for a twist in the myth. Some entries into the “Weird West” genre have been a little less than subtle about it (come on, “Cowboys and Aliens” isn’t trying to slip anything under the radar). Others have used elements of steampunk and gothic horror, more “period piece” genres that aren’t quite so left of center when blended into the Western story.

And then you’ve got Deadeye. On its surface, this is a story right out of the gritty imaginations of the genre’s masters… There’s the obligatory gang of outlaws, taking what they want and living by no law but the Law of the Gun. There’s the Lone Rider, a man with no name, haunted by his past and determined to see justice done at any cost. We’ve even got the sleepy little town, for all intents and purposes owned by the local rich guy, whose sons treat the populace like their personal serfs and playthings. In my head, I’ve cast this movie with the likes of Sam Elliot, a young Clint Eastwood, and Eli Walloch.

“But, Paul,” you ask, “how does this very traditional sounding Western tie in with all that other stuff you were talking about before?” I’m glad you asked… Because underneath it all, behind the scenes, we have aliens. They aren’t the smash and grab variety, tearing through people and taking prisoners for whatever weird alien crap we think aliens would need human prisoners for. They’re the behind the scenes kind of alien, stranded here on this backwards little rock, manipulating the indigenous primates and steering history until they’re able to dust themselves off and head back home.

Mostly… But there’s always one in the bunch, isn’t there? That individual more interested in getting away with what they can, because they can, while the more enlightened sit and shake their heads. He’s the wild card that can muck up the works, but not enough for his peers to take direct action against. More interesting to guide the primitives toward that end, just to see if they can pull it off.

Deadeye is a layered story, told from two very different perspectives. The writing is damn near poetic in places, as we’re shown two contrasting threads woven together as the parties involved travel their parallel paths. The art is exactly that… no simple line drawings sketched and inked onto a page, but painted pieces done in a pallet of earth tones that reflect the environment perfectly.

At 128 pages, you might think you’ll need to take this story in blocks. Maybe you will, and that’s perfectly fine… But I burned through the book in a sitting, and at the last page I was pretty vocal about where it leaves off. I’m looking forward to the next installment, like a slow trigger pull that has the hammer just about to fall… 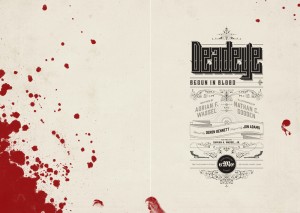 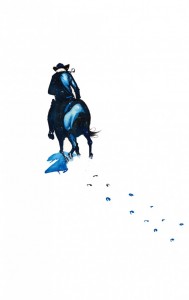