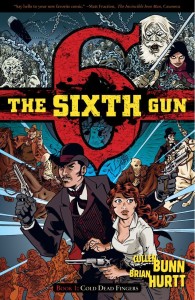 The Sixth Gun, Trade Paperback volume 1, by Oni Press
Written by Cullen Bunn
Art by Brian Hurtt
Collecting issues #1 – #6 of the hit new series by Cullen Bunn and Brian Hurtt!
During the darkest days of the Civil War, wicked cutthroats came into possession of six pistols of otherworldly power. In time, the Sixth Gun. the most dangerous of the weapons, vanished. When the gun surfaces in the hands of an innocent girl, dark forces reawaken. Vile men thought long dead set their sights on retrieving the gun and killing the girl. Only Drake Sinclair, a gunfighter with a shadowy past, stands in their way.
———-

Most of the time, I try to stay away from posting about older books in favor of keeping up with new items currently in release. Maybe it’s the purist in me that thinks I need to “keep up”… I don’t know. What I do know is that I have a soft spot for genres that are a little “left of center”: steampunk, cyberpunk, and in this case the Weird West. None of that would matter if the book was crap, but let me tell you that this book is more than deserving of some notice. Besides, it isn’t the book’s fault that I’m just that damn slow.

The Sixth Gun follows Drake Sinclair as he tries to head off his former Confederate commander, Oliander Bedford Hume, on his bid to claim what he believes is rightfully his. In the true spirit of evil madmen everywhere, Hume wants to retrieve his six-shooter so he can take his place at the top of the food chain. Sinclair is joined by reluctant gun bearer Becky Montcrief, and gambler Billjohn O’Henry, and the three present a pretty formidable obstacle in Hume’s path of destruction.

Wow, that’s all pretty dramatic sounding, ain’t it? Let me just tell you that it fits. Oliander Hume is as over the top a villain as has ever been written, and his followers are right behind him in every respect. Over the years, they’ve gathered six guns of power… guns that, according to some were created in the fires of Hell, but the Devil himself wanted nothing to do with them. The guns never need to be reloaded, and each has power to spare. One spits hellfire, another shoots with the force of a cannon, and Hume’s own give its wielder visions of the future.

Fortunately for the good guys, Hume doesn’t have his gun… It’s currently in the possession of Becky Montcrief, and Hume can’t get it back so long as she’s alive. It seems that once someone picks up one of the guns, that person is the only one who can wield them without being burned and consumed.

Cullen Bunn and Brian Hurtt do a fantastic job of storytelling, laying out their world in a beautifully cinematic way, allowing their characters to be more than trite stereotypes of “hero”, “villain”, and “damsel”. Also, the themes in this story are great… Are “bad men” capable of reaching redemption? If they are capable, are they deserving? And if they are deserving, is redemption what they really need, or does it in fact take a “bad man” to do what sometimes needs to be done?

I’m new to the series, but I’m officially a fan, and have every intention of catching up as soon as I can. 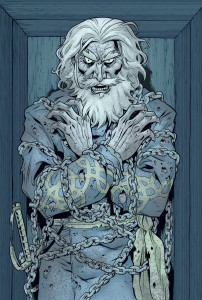