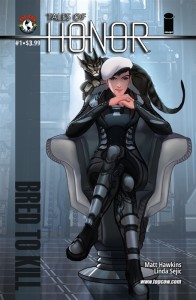 Tales of Honor: Bred to Kill #1
Writer: Matt Hawkins
Artist: Linda Sejic
From the best-selling science fiction novels by David Weber comes the first-ever original comic story arc set in the Honorverse! Captain Honor Harrington and her alien treecat Nimitz investigate her uncle’s disappearance and are forced to fight for their lives in a Solarian space casino battle arena. Honor may be genetically enhanced, but when she’s up against a super race bent on protecting their profitable slave business all bets are off.
———-

Having arrived pretty late to the “Honorverse”, I’m finding myself with a lot of catching up to do. When I started reading the first book in the series, “On Basilisk Station“, I had no idea that the book was written twenty years ago. For anyone interested, I’ll just put my two cents in and say that this was a very good read. The pace was always moving, the dialogue was good, and it was obvious from the beginning that author David Weber wrote this book out of a love of military and naval history. Honor Harrington is everything you would imagine the Captain of a battle cruiser would be: tough, decisive, intelligent, and loyal to her ship and crew.

For those not really interested in picking up a new book series, I understand. Weber’s been busy over the last twenty years, and it looks like the legendary ship’s Captain Honor Harrington has been busy. What you could do would be to pick up Top Cow’s first forray into Weber’s military sci fi universe and read the comic adaptation of On Basilisk Station. It gives a pretty good overview and plenty of back story to get new fans going, and is a good recap for past readers.

Once you’re past all that, you’re ready to dive into Bred to Kill, the first original Honor Harrington story written for comics. It takes place somewhere in between the first and second novels (there was a few years time in between there to fill in), and fills us in on some of the off-ship adventures of Harrington. It starts with a message from her mother, letting her know that her uncle has gone missing, and asking for her help in finding him. Honor takes the challenge, and with her “tree-cat” Nimitz and a small hand-picked band of crew members, she’s off to take care of business.

Like I said, I’m still new to Weber’s books, so I don’t have some of the pre-conceived ideas that dedicated fans might be loaded down with. The characters are all very well drawn by artist Linda Sejic, and fit their source material to a tee… even though personally I thought that Nimitz was a little more “house cat” than I’d pictured him from the books. While there wasn’t a lot of action to go by, what we did have seemed to show some good flow through the panels.

The writing did a find job of opening up the new characters and settings to new readers. Remember, this is a book franchise going back twenty years, so there’s a LOT of source material to draw from. The character of Honor was interesting to me because in what I’ve read so far, she’s a very in control and disciplined commanding officer. Here, we get to see her away from her ship and crew, on her own time as she’s using shore leave to look for her uncle. Off duty Harrington seems a little more loose, willing to play in the gray area more than her on duty self. I like it so far, and we’ll have to see if the writing can keep going along these lines without taking her too far away from the character people might know from the books. Anyone who’s spent any time around career military personnel can tell you that even when off duty, you can only take them so far outside of the role.

The novels give us some brilliantly written space battles, huge in scale and dramatic in concept. It looks like the comic, at least to start out with, is dialing that back a notch. I hope it isn’t too big a departure for the diehards out there, because if done well, this comic series could be a great jumping off point for Bigger and Better Things. 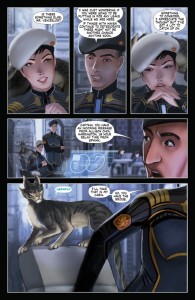