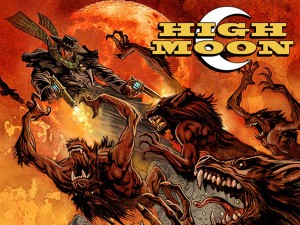 Former Pinkerton detective Matthew Macgregor investigates a slew of strange happenings in the town of Blest, Texas, a town parched by drought, stricken with famine and haunted by werewolves. As Macgregor attempts to unravel the secrets of Blest, he struggles to contain the secret of his own supernatural past… a struggle that will continue to haunt him across the plains of the American West. At sundown, there will be a showdown — at High Moon!

In a market where you can’t take five steps without tripping over a decomposing zombie, a vampire (sparkling or otherwise), or a moody over-thinker in a cape, you have to ask yourself, “Self, where in all the Wide World of Sports is the werewolf western story?” My friend, look no farther than High Moon from Bottled Lightning! The creative team of David Gallaher and Steve Ellis have composed an ode to Gary Cooper and Lon Chaney Jr that will satisfy your craving for some Weird West action.

Matthew MacGregor prowls the west, looking for… well, we’re not really sure what it is he’s looking for. Redemption for the sins of a dark and clouded past? Understanding of his place in a world of darkness (see what I did there?)? It really could be either of those, but personally my take is that MacGregor’s looking for revenge and he’s happy to take it out on anything furry that walks on two legs. Former Pinkerton detective MacGregor is a werewolf, and he’s not at all pleased with the prospect. Whatever his motivation, his hunt brings him to Blest, Texas. A string of brutal deaths have left the town suspicious of strangers, and terrified of what lurks after sundown.

Composed and produced as a web series, this comic is a great adaptation of an underused genre that I’ll put right alongside another personal favorite of mine, The 6th Gun from Oni Press. Stories of the old West are full of superstitions and legends, so why not open that up to stories involving the supernatural? It’s a perfect fit, and one that I’ve been interested in for a long time… Tragically, entries into this genre have been lacking. Movies like Jonah Hex have scratched the surface, and television shows like The Adventures of Brisco County Jr (arguably more steampunk than weird west, but I think it still fits) haven’t seemed to catch on.

Hopefully in the comic book medium, we can keep on getting entries like High Moon. I would encourage anyone out there with an interest in something a little bit different to pop over to ComiXology and pick up the collected edition… $2.99 for a 245 page digital edition is a huge bargain, and it sends the message out there that more of the same has an audience waiting. At the very least, this creative labor of love deserves some attention.