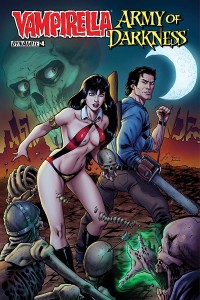 The splatterific climax! After Vampi’s witch trial, she and Ash race to face an abbey swarming with possessed monks. Which is just a speed bump compared to the demonic angels the monks have conjured. A secret chapter from before the Deadite siege in Army of Darkness, from Mark Rahner (The Twilight Zone Shadow & Substance) and Jethro Morales (Dejah of Mars).
———-
“MY name is ASh… and I’m a monk. On a romp in the English countryside of 1300 A.D. with a 21st century vampire supermodel.”

Dynamite seems to have really taken a shine to two of cult pulpdom’s fan favorites… Vampirella and Ash. Just take a gander at Dynamite’s website and check out the titles dedicated to these two. Who can blame them? Vampirella, the alien vampire on the road to redemption, represents everything that could be better about humanity… also, kinda hot. Ash is… um… Well, most of the time he tries really hard, but aside from being really good at killing Deadites he is the penultimate “every-man” turned reluctant hero. These are two of literature’s most well, and yet poorly, represented tropes.

For this outing, Dynamite has taken the unlikely duo and placed them in pursuit of a plot to release a demon horde upon the world. All they have to do is stop a misguided order of monks from reciting the incantation before it’s too late. Simple stuff, easy peasy, right? Except that during her transition through the mystic portal that brought her back to the 1300’s, Vampirella seems to have gotten a little Deadite in her. Will the Evil Dead’s influence rear its ugly head at the wrong time and prevent her from carrying out her mission?

For that matter, will Ash ever fulfill his destiny as the “chosen one”? Will he make it back to housewares before the blue light sale is over? Will he ever call Vampirella by name and stop calling her “babe”?

Yes, reader, for these answers and more, you need to check out the thrilling climax to this four issue mini series. So, say the words with me…