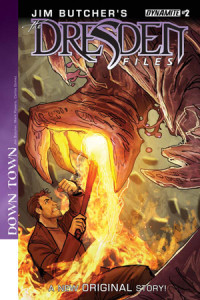 Cover: Stjepan Sejic
Writer: Jim Butcher, Mark Powers
Art: Carlos Gomez
Genre: Fantasy, Action/Adventure
Publication Date: March 2015
ON SALE DATE: March 11
Something large, ruthless and possessed of supernatural power is smashing its way through Chicago-not to mention some of its residents. Harry and Molly are desperate to end its trail of destruction, but first they need to figure out what the blasted thing is. Further complicating matters is the involvement of “Gentleman” Johnny Marcone, the city’s most powerful mob boss and recent signatory of the Unseelie Accords. Marcone’s determined to find the creature, too-and if he has to go through Harry, so be it.
——–

Fans of the series of novels this comic run spins off of will find something to hold them over while they wait for Jim Butcher to get the next book out. Readers who are new to the DresdenVerse shouldn’t deprive themselves anymore. They should immediately run out to get the books.

While the rest of us are waiting for them to get back, let’s talk.

I wasn’t lying when I said that there’s a lot here that’s familiar. All of the characters we love are present and accounted for, including Mister and Mouse (Harry’s cat and mystically powered and intelligent temple dog). Things that might not be as familiar are the changes in perspective as we occasionally pop away from Harry to see what’s shaking with the other characters.

“Wait, what? But, Paul, I thought the Dresden Files were all in first person POV. I thought the supporting characters just sat around playing cards or something when Harry wasn’t around.”

I know, right? This is all very true, at least for the regular book series. Here, however, the pattern has been broken, and we do get to see that things are in fact happening outside of Harry’s perspective. Now, while the first person in the books works great, letting us learn and discover things along with Dresden, it is nice to give the other characters some play as players in their own right. It isn’t a frequent event, though, so we’ll see if it Makes much of a difference as the story moves along.

To the story… Harry is on the trail of a supernatural killer, one that doesn’t fit the mold of anything he’s run into yet. His investigation leads him deep into the underbelly of Chicago, literally into the abandoned tunnels of Undertown. Things could go badly for Harry, as Undertown is the home of so e of the nastier things that go bump. Meanwhile, Harry’s apprentice, Molly Carpenter, is letting her sense of curiosity get her into trouble. With Harry off conducting his investigation, it could be up to Mouse to save the day!

However it turns out, we can be sure that Harry Dresden, the only openly practicing wizard in the phone book, will go to the wall to put a stop to the killings, bring the guilty to justice, and have Molly home in time for supper. He’d better, or Molly’s mom, Charity, will bring the hammer down.