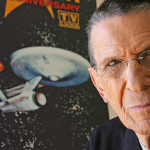 Leonard Nimoy, who became one of the science fiction world’s most beloved icons for his portrayal of Spock in the Star Trek franchise, died Friday at his home in Los Angeles of end-stage chronic obstructive pulmonary disease, his wife Susan Nimoy confirmed to the New York Times. He was 83.

Though his career was rich—spanning six decades and including varied roles in television and film, as well as directing, poetry, and photography—Nimoy’s turn as the half-Vulcan, half-human First Officer of the starship Enterprise remained an indelible part of his identity to the very end.

From an early age, Nimoy possessed an innate understanding of an alien’s perspective. The son of Ukrainian immigrants—his father, Max, owned a barbershop, and his mother, Dora, was a homemaker—Nimoy was raised in a home in Boston where Yiddish was the dominant language. With his unconventional, vaguely exotic looks, the aspiring star spent much of his early acting career stuck in small parts in TV shows like Dragnet and B-movies like Them!

But when he was cast as Spock in Gene Roddenberry’s Star Trek, he found the ideal vehicle for his distinctive screen presence. With his stoic adherence to reason, Spock proved a perfect foil for William Shatner’s emotionally explosive Capt. Kirk, and many of the Vulcan’s quirks—the splayed hand salute, the benediction “Live long and prosper,” the nerve pinch, the mind-meld—would become enduring touchstones for sci-fi fans.

While the original Trek series was cancelled in 1969 after just three seasons, it spawned a franchise that thrived through numerous TV spinoffs and films. Despite his initial ambivalence about being typecast as the pointy-eared Vulcan, Nimoy eventually came to embrace his screen alter ego, and reprised the role in the 2009 big-screen reboot Star Trek, passing the torch to a new Spock, Zachary Quinto. He reprised the role in his last film, 2013’s Star Trek Into Darkness.

“I went through a definite identity crisis,” Nimoy reflected in his 1997 memoir, I Am Not Spock. “The question was whether to embrace Mr. Spock or to fight the onslaught of public interest. I realize now that I really had no choice in the matter.” As Spock himself would say, it was only logical.