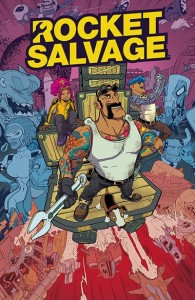 Rocket Salvage #01 (BOOM! – Mercado / Machan)
WHAT IT’S ABOUT: Primo Rocket used to be the fastest speeder-racer in the galaxy, but after a crash that sealed the fate of his space-station-city home, Rio Rojo, Primo has resigned himself to life as a lowly spaceship salvage yard owner. However, his two “kids”–harvest clone Beta, and Beta’s genius girl-clone Zeta–can’t seem to keep out of trouble. When the dysfunctional family suddenly becomes the target of an intergalactic manhunt, the family has to come together to save their home.
——–

Something about reading this book brought to mind the Burt Reynolds classics of the 70’s and 80’s… Hooper, Smokey and the Bandit, and Stroker Ace in particular. In my mind, these movies were just about entertainment. The banter was witty, the cars were fast, and the good guy had pretty much everyone and their brother gunning for him. Primo Rocket and his motley crew aren’t the best there are, and for that I started rooting for them early on.

Not to say that the first issue doesn’t have some rough points. In the first few pages, we’re introduced to a slew of characters, and as the book moved along I found myself bouncing back to the start to catch up on who was who. The story moves fast… fitting, I guess, being about a galactic culture that regards racing as something almost holy. Just hang in there and keep your eye on the prize… This is a six issue mini-series, so there isn’t a lot of time to establish a back story. It’s more of a “learn as you go” sort of setup, and that’s not a bad thing at all.