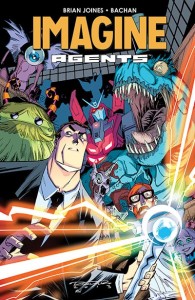 WHAT IT’S ABOUT: Ever try to wrangle an illiterate, 30tall rock monster away from his five year old best friend? Or calm down a 400 pound musclebound rag doll during her daily temper tantrum? For Dave and Terry, it’s all in a day’s work. As agents for I.M.A.G.I.N.E., they are responsible for keeping your imaginary friends in line. Little do they know that an abandoned figment from days past has a plan to change the status quo. What happens when the imaginary friends become the ones who are seen? Collects the complete miniseries.
——

Very cool premise… The imaginary friends of childhood are real, intruders from somewhere…. else. Some come along, find a child, and create no problems. They spend their days as a best friend, until the child is just too old to see them anymore. Then they’re picked up by agents of I.M.A.G.I.N.E. (Institute for the Management, Acclimation, Guardianship, and Incarceration of Notional Entities) and taken to a community where they can live out their days. Others come into a child’s life and, maybe through no fault of their own, create chaos, anarchy, and discontent. These are rounded up and experience the “Incarceration” part of the acronym.

The agents have been busy lately. Imaginary activity has been on the rise, and the only explanation is the name of a mysterious, powerful, charismatic entity… Dapple. He’s gathering a following, and isn’t satisfied with things the way they are. Dapple wants more… More freedom… More power. And Agents Dave and Terry are on the case to bring things back under control.

Great opportunity to jump in here, as the trade paperback collects the entire mini-series. The concept may be reminiscent of Men in Black and RIPD, but in the execution the story manages to stand on its own.