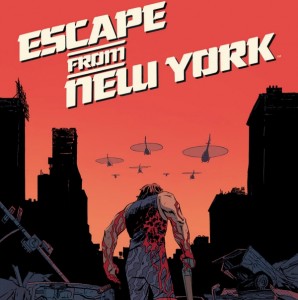 WHAT IT’S ABOUT: The crime rate in the United States has risen 400 percent. After humiliating the President in front of the world and destroying America’s one chance to end World War III, Snake Plissken has become America’s Most Wanted man in a land of criminals and the insane. Everyone wants Snake dead. Luckily, Snake knows the feeling all too well. War hero. Outlaw. Renegade. Snake’s back!

I came into the first issue of this series as a fan… I grew up on John Carpenter films, and watched Escape From New York incessantly when I hit my angsty youth stage and discovered my love of action movies. This was a no brainer going in, and I honestly feel a little guilty about reviewing it. It’s like I’m cheating or something… taking an easy out just to post a review.

Well this isn’t easy. At all. First off I am going to say that there’s a lot great about this issue, and I hope that the creative team can work with what’s there and build it into something awesome. The action picks up as Snake Plissken is walking away from the newly rescued President of the U.S. of A., pulling apart the all-important tape cassette (if you don’t know what that is, go ask your Dad… and then tell him you want to watch this movie. Do it now… I’ll wait… you back? Okay, good) and being placed right back at the top of the most wanted list. It’s open season on Snake, and you get the feeling that he’s just fine with that.

Now some bad… Things were rushed along too fast, like there was forty pages worth of material and the publisher was determined to jam it into twenty-six. This resulted in some heavily muddled action that wasn’t always easy to follow, and it made it tough to keep track of where the characters were at any given time. There’s a road trip from New York to Florida, and we’re assuming that even in this pseudo-futuristic world at the brink of war, where chaos and anarchy reign, nothing happened. Not so much as a panel devoted to any shenanigans on the road. And then the book culminates in an implied action sequence that looked like it could’ve been pretty epic, but it was all over before I really had the chance to look forward to it.

I swear, I’m not trying to talk anyone out of this book. Go out, buy the book, read it, and then toss out your own feedback. I’d like to see this title get its footing, and take off like the bat out of hell that it should be. The first issue was rushed… Okay, it’s done. Now let’s settle down a bit and give our man Snake a chance to catch his stride and do what he does. The source material begs for a good comic treatment, and Boom! should be able to do it justice… All I’m saying is, give Snake a chance.