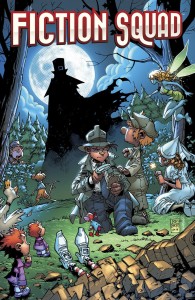 Fiction Squad #02 (BOOM! – Jenkins / Bachs)
Jack, of Jack and Jill, has taken a tumble. Humpty has cracked. The Wicked Witch of the East is buried under a two-story house. Key players are being knocked off right and left and someone is trying to push the Queens of Wonderland and witches of Oz into a gang war. It is up to Frankie, with his partner Simple Simon, to solve the mystery before another death comes knocking at his doorstep.

Frankie Mack, gumshoe detective from a forgotten thirty page novella, crossed the genre border from the realm of crimes and mysteries, into the fairy tale town of Rimes. He’s been working the Nursery Rhyme Division ever since… It’s no picnic. Everyone forgets that at the heart of every nursery rhyme, there’s a crime scene. Beanstalk heists, goose abductions, and home invasions culminating in porridge theft.

At the heart of it, running the show, the head honchos: the Madonnas… the Queens (Hearts, Spades, Diamonds, and Clubs) and the Witches (with flying monkeys working for them as muscle), calling all the shots and always squabbling for power among themselves. When the East Side Witch has a house dropped on her, it’s pretty obvious that the Madonnas are going to war, and the citizens of Rimes had better duck and cover.

The mayor of Rimes, a very Crooked Man (lives in a crooked house) wants the case closed. Egg shells scattered around the crime scene point to one Humpty Dumpty as an easy suspect. Get a confession and be done in time for dinner. Mack smells a cover up. Everyone knows that Dumpty moved black market eggs for the Queens, and Mack’s prize informant- Pinocchio- has confirmed that things are coming to a head between the ‘Donnas.

These books are just fun, plain and simple… The story moves at a great pace, always throwing something your way and chock full of Easter Eggs hidden in the panels. The artwork is top notch for the subject matter, Saturday morning cartoon-esque with enough details to keep your eyes moving around the backgrounds after you’ve read the dialogue.

Have fun with this one. Just don’t tell the ‘Donnas I sent you… I don’t need that kind of pressure.