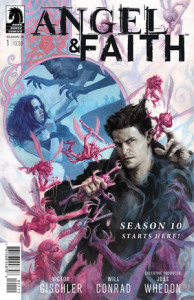 Angel’s work is never done. During his most recent world saving, a part of London was transformed and flooded with magic. Who better to watch over this magical community than Angel? At least, that’s what he thinks. Meanwhile, Faith starts a new chapter in her life—slaying zompires alongside Buffy?!

I don’t know what the general opinion on “trade paperbacks” is around the community, but I for one am a fan. It isn’t always easy to get the monthly issues, and sometimes (like this instance in my case) you just fall behind and lose track of a title. When the collected editions come around, it’s a great chance to get back on the bus, so here we go…

Angel and Faith… going as far back as the television shows, these two have had an odd thing going. They’re not really “friends”, or usually even “allies”, but they’ve had an interesting connection that really built over time. When they were thrown together after Faith’s fall from grace and inevitable comeback, there was tension. Even before her fall, Faith took the “Slayer vs Vampire” thing pretty seriously, and the idea of Buffy dating one seemed to get under her skin.

For his part, Angel wasn’t inclined to give Faith the time of day. And then she put a poisoned crossbow bolt in his chest. Getting past that really took some class, but Angel remembered what it was like to embrace the Dark Side. In the later seasons, he seemed determined to give Faith a shot at redemption. In the show, it really came across that these two had a parallel road laid out in front of them, not necessarily intersecting (cuz even my basic understanding of geometry tells me that wouldn’t be “parallel”), but definitely heading in the same direction.

All of this brings us to “Season 10”. As things open up, we have Angel in the London suburb of “Magic Town”, a wild and wooly place where magic is a little wild, a little random. The monsters have set up house here, and the magically disinclined are trapped with the choice to take cover or risk being put on the menu. Enter Angel, determined to do his part to clean up the mess that he had some part in. The problem is that the rules have changed, and his old instincts have him fighting the current of things.

Faith has brought a resurrected (and suddenly underage) Giles back to his place beside Buffy, and she’s feeling a little left out of things. Not having any other “irons in the fire”, she accepts Kennedy’s invitation to sign on with her Slayer run private security firm. Behind the mounds of paperwork, the rules and regulations that make up the life of a corporate earner, Faith finds herself ice skating uphill… She doesn’t fit in anywhere, and has trouble following the pack on the best of days, which seem to be few and far between lately.

So here we have two pretty major characters of the BuffyVerse, each with their own problems and puzzles to solve, and they’re both working to figure out how they fit into the New World. This is a great story, not in the least bit hindered by the fact that its two title characters never even cross paths (at least so far in this volume, which collects issues 1 through 5 of the ongoing series). The artwork is, I have to say, great! One of the major problems with comic adaptations of movies and TV shows is that the artists can’t always consistently translate the real people we know and love onto the page, keeping them recognizable for the fan base. That isn’t remotely the case here. Every character is spot on from start to finish.

Fan of the shows? Do you miss Joss Whedon’s BuffyVerse? Give this, and the other titles, a good look. There’s some really good stuff here, waiting for you to dive back in…