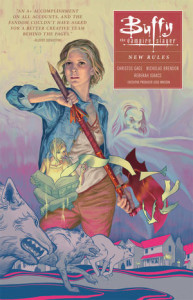 While slaying a hoard of zompires, Buffy and her pals are shocked to discover a new kind of vampire: harder to kill, able to transform and walk in the light of day—like Dracula . . . The rules of magic are literally being rewritten . . . Collects Buffy the Vampire Slayer Season 10 #1–#5.

I dunno… maybe it’s me but it almost feels like cheating when I do up a review on a property I’m already a fan of. And then to do a review on a trade paperback? I keep it up, I’ll have to turn in my Pullbox creds and fin a full on fanboy page to troll. But, getting past my hangups is all part of growing up, right? My wife says I’m an idiot, so I’m gonna give it a shot and see how it goes.

I was a fan of Buffy the Vampire Slayer, but not from the start… Honestly, I heard the name thought it had to be the most ridiculous thing ever concocted by man. Or woman. Really, anything that had the ability to concoct anything should have been able to come up with something better than that, right?

Around the middle of season two, I watched an episode. I wish I could say it was by mistake, but I saw a cute chick duking it out with monsters, and figured there were worse ways to kill an hour. After the episode, I realized what a lop I was. That whole “book by the cover” thing walked up, tapped me on the shoulder, and cracked me across the mouth. That show had some of the best writing on television, period, and in my opinion it still holds up to this day. Joss Whedon didn’t dumb anything down, ridiculous title aside. He didn’t take any shortcuts. He created some great characters that actually grew and evolved throughout the seven season run of the show.

And then it went away.

When I heard that he was picking it up again, reopening the BuffyVerse in an ongoing comic book series, and actually breaking each run down into a “season”, I thought it was brilliant. I read season 8, and thought it was some of the best writing in the comic book medium. The stories were true to the series, and the characters were still the people that made the show an ongoing phenomenon with a rabidly loyal fan base.

Season 9 derailed… went totally off the tracks and crashed through a hospital and three schools before it was over. In an afterward, Whedon himself said that they got a little full of themselves and let things get too BIG. The comic series wasn’t held back by silly things like special effects budgets, and the creative team running things got a little drunk with power.

Season 10 is bringing the show back to its roots. The stakes are huge, but Buffy pretty much saved the world in the show, at least once a season, so that’s nothing new. What’s back to basics here is that the characters are once again plagued by more than vampires and demons… They’ve got insecurities and personal issues aplenty. They’re people again.

Magic is wild in the world. The rules are changing. Vampires have changed, becoming more powerful and tougher to take down. The literal book of magic, seen at the beginning of every television episode with the title “Vampyr” on the cover, is rewriting itself as everything changes. The gang comes to realize that some of the changes are too specific, too beneficial to the bad guys, and that someone out there must be taking a hand in the process. The only way to combat this new “Big Bad” is to take some control over the book themselves, to steer things so that the rules come out a little more evenly.

I think of all the things that made the trade paperback a great read was that the idea of Buffy’s crew being referred to as “the Scoobies” is used to the full extent in every aspect, from the writing to the artistic style. Things are very serious, for sure, but there’s all of the humor throughout to keep it all from getting too heavy and discouraging. We want these people to win, to come out okay, because they’re hilarious, and just cool. If they can laugh their way through a “Zompire” (zombie/vampire hybrids) apocalypse, what do we have to worry about?