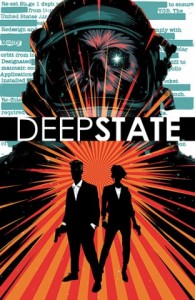 John Harrow doesn’t exist, and his job is to make sure that other things don’t exist, too. At any given time, the government is running dozens of black book operations, experiments that aren’t on any official record and are never acknowledged to exist. Some of these are innocuous. Some of them are monstrous beyond reason. And most of the time, they go as expected and the public is never the wiser. Most of the time. John Harrow’s job is to handle them when things go wrong, and do anything to make sure the government’s secrets stay just that—secret.

All of the things you’ve heard, thought, suspected, and wondered about are probably true… and John Harrow works for the organization in charge keeping the “theory” in “conspiracy theory”. If he’s done his job right, you’ve never heard of it and hopefully you never will.

A Russian space pod from the 1960’s lands back on earth near Bedford, Pennsylvania. Harrow knows that something was on the moon waiting for us when we got there, way back in the sixties, and has been biding its time, waiting for its chance to come down to earth for a walkabout. Harrow needs to make sure that whatever it is gets put away before it makes the news.

There’s some solid storytelling going on here, and John Harrow is one of those characters that’s written well enough to have you trying to fill in his blanks. We don’t know much about him, but I for one would like to. Also, there are some easy comparisons to make, and I like that the creative team doesn’t shy away from them. “Men in Black” gets a humorous nod, and John Harrow has a newly recruited partner, Ms. Branch, who is every bit as skeptically curious as a certain red-headed FBI agent from a while back. But the first issue doesn’t seem to be worried about that, and is intent to roll along and tell its own story. I can appreciate that. So far, it isn’t doing too bad a job.