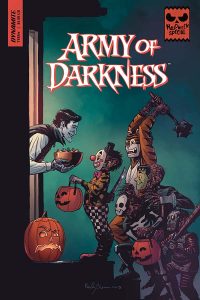 When a crazed tour guide raises the spectral remains of the galleon that brought the Necronomicon to America, Ash finally meets the one thing he hates more than Deadites – ghost pirates! It’s chainsaws and boomsticks against cutlasses and muskets, and if Blackbeard’s men can’t have their treasure, the Promised One’s head will have to do!
———-

In “Scared Shipless”, online catfishing turns deadly when Ash is lured seaside with the promise of some shallow and meaningless fun. Instead, the ghostly Queen Anne’s Revenge- captained by none other than Blackbeard the deadite pirate- shows up to wreak some mayhem. With nothing but the blood sacrifice of the Promised One between the undead pirates and freedom from their watery curse, it’ll take the combined might of Chin and Boomstick to send them back to their watery grave. Will Ash be able to halt the pirates’ advance, keep all of his blood and internal organs internal, and maybe even score a date?

In “Cemetery Man”, it’s all fun and games until a Ouija board calls forth the denizens of Hell, and whacky college hijinks turn into deadly… hijinks. Kids, there’s a reason all the cool ghosts and goblins call Hallween “amateur night”, so don’t think that you can just wander into a cemetery and meddle with forces beyond your ken. Or Barbie. Skipper, even… Look, just don’t, okay? There’s no guarantee that a certain chainsaw-handed, shotgun toting ne’er-do-well will show up to save your bacon.

With Halloween just around the corner, pumpkin spiced lattes and seasonal one-shots are a given. While I can’t in good conscience condone the former, the latter is just what every dedicated trick or treater needs. In the case of this giant-sized… okay, above average-sized… special from Dynamite Entertainment, it’s a nickel (nectarine…? necktie…?) plated boomstick for the win. Nothing too serious, mind you, just some old-fashioned deadite slaying good times with arterial spray aplenty.

Contained within these pages are two standalone tales of chaos and carnage, with everyone’s favorite housewares sales rep leading the charge. Don’t look for deeper meaning or hidden truths, because you’re not gonna find anything even close to profound here. Matter of fact, I can’t believe you’d even consider reading this particular review if that was your thing. No, I’m sure that what you’re really looking for is a round of romp-n-stomp with everyone’s favorite feckless wonder.

The two stories, written by Chad Bowers & Chris Sims (Scared Shipless) and Benito Cereno (Cemetery Man) have captured all of the cheesy one-liners and gratuitous violence fans could hope for from this beloved franchise. Honestly, if our boy Ash were to ever start spouting Shakespearean prose, I would have to consider the Apocalypse well and truly nigh.

Also, the visuals should be on par with fanboy/girl expectations. The combined efforts of Eoin Marron, Chris O’Halloaran, & Taylor Esposito have brought Ash’s battle against the undead forces of Blackbeard to the page in a fast-paced fight to the finish. The second story features the talents of Sam Lotfi, Dee Cunniffe, & Taylor Esposito (jeeze when does that guy sleep?), and is more of a quick punchline as most of the actual action takes place off of the page. In both cases, everything that is Ash has been ably rendered, colored, and lettered in all of his square-jawed glory.

I dunno, kids, this really should be a pretty easy sell. We all love Halloween. We all love classics like Evil Dead and Army of Darkness (just nod cuz even if you’re not a fan, you’re almost done with the article…). We all love seasonal one-shot comicbooks. I think my work here is done.