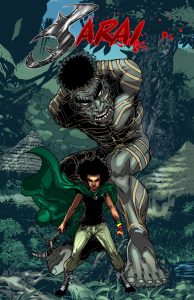 Sarai is a 12-year-old Nigerian girl whose modest village life is shattered when she is captured by the Ken Jou Plek (Afrikaans for “Know Your Place”), an extremist organization dedicated to the idea that women and girls should be kept down. Like all extremists, the KJP are prepared to realize this vision through torture, slavery, and bloodshed. Certain she is going to die, Sarai makes a bargain with an unusual ally in an attempt to save her life and the lives of her fellow captives.
———-

Sarai’s school day started out like every other day, with its own challenges to be overcome and lessons to be learned. What she probably didn’t realize when she got out of bed was how quickly a normal day could turn, and just how horrible it could get. That’s the lesson learned when armed men storm the school. Sarai’s teacher, Mrs Fatima, is killed trying to protect the children in her care. Emeka, a boy Sarai had defended from a common schoolyard bully that very morning, is shot for speaking out of turn… more a matter of timing than anything else as the rest of the boys are lined up along a wall and executed.

The rest of the children, the girls, have a different fate waiting for them. Herded into a waiting truck, they’re taken away from the school where they’re to be “processed”, separated by age and prepared for sale to the highest bidders. The only thing keeping them remotely safe from abuse is an order from the leader of the men, a warning that “damaged goods” won’t turn a profit.

As terrified as she is, Sarai is unable to stand by when Samuel- a sadistic brute even among his peers- turns to one of the younger girls. When Sarai intervenes, she becomes the focus of Samuel’s cruelty. Finally, with no one else stepping forward to protect the girls, Sarai is given a choice- surrender to the brutality of her captors or become the living embodiment of Sakarabu, god of justice and retribution.

Before we go any farther in this review, I think I need to point something out… something that may or may not have been made obvious by the previous paragraphs. Sarai is NOT a comicbook meant for children, or to be read as simple entertainment. This title is a statement intended to bring awareness to its readers. The situations portrayed are fictitious, but only so far as the godly intervention and super human retribution are concerned. The reality is that these things are happening out in the world, right now. The violence depicted in Sarai may be hard to digest, and if it bothers you to see the kind of abuse shown here… good. That makes you more human than the real life perpetrators of that violence in the world today.

When Sarai’s creator and writer Sonica Ellis saw a news report about the actions of extremist group Boko Haram in Nigeria, she was horrified. Children murdered, girls dragged from their school to be sold and married off to men who were perfectly comfortable with the arrangement. Anyone would be- should be- horrified at the idea. From there, Ellis has said that she felt like she had to do something to shine a light on the subject. In a time when superheroes are at the height of popularity, she decided to write about 12 year old girl who refused to be a victim, to create a situation in which supernatural forces stepped in to wreak a little “eye for an eye” on a band of inhuman savages.

As a story, Sarai worked for me on a few different levels. Sonica Ellis has made what I feel had to be a difficult choice, in that she refused to shy away from or tone down the violent acts portrayed in her book for the sake of more sensitive readers. It’s important to realize that the violence isn’t there for its own sake, but is a depiction of real world events and atrocities that some may not believe are taking place in modern times. The bad news is that these things are happening, and that they occur much more often than some might think. The decision Sonica Ellis made to face these atrocities head on is an important one because by softening the violence, I believe she would have done a disservice to anyone subjected to it. In addition to being an effective rallying cry meant to raise awareness, Ellis has also brought something new to the medium by using themes and imagery that reflects her story’s setting. Comics are full of Norse gods and Western spirits of vengeance, but there aren’t enough titles out there representing other cultures and their legends. The inclusion of Sakarabu as a very unique character and the source of Sarai’s power is a great step in that direction.

With the story written, all that was left was to find the right artist to illustrate it. The job couldn’t have been easy, but J.C. Grande knocked it out of the park. The action is easy to follow and works well on the page, and Grande is able to capture some great character moments through facial expression. Stylistically, Grande’s work might fit right in among more mainstream superhero titles, and as I think about it that might be something that keeps Sarai from being viewed as nothing more than an ultra-violent shock comic. It’s a concession- along with the black and white format- that may serve to make the more disturbing images, if not palatable, at least readable. Whether that was a part of the decision making process going into the book or not, it’s another factor that works well. Finally, another part of the book’s visual appeal is in the character designs, particularly for Sarai and Sakarabu. It would’ve been easy to arm Sarai with a more familiar style of weapon, but as a cultural symbol the use of a hunga munga (or a Mambele) is a great choice (fans of the show “Forged in Fire” might recognize it). As for the vengeance god, there can’t be any doubt that he just looks fearsome and cool as hell!

And again, Sarai is going to hit some people harder than others, and it is absolutely not for children. The themes covered in this story hit some pretty dark lows, but to make the story less brutal would be to soften the impact of a subject that should hit hard. The fact that Sarai is topical and controversial, while remaining an entertaining read is nothing short of a miracle. It’s a story that deserves to be read and talked about. 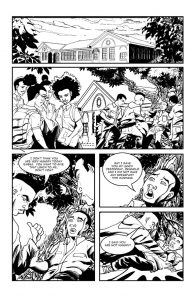 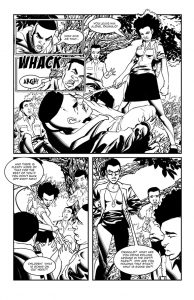 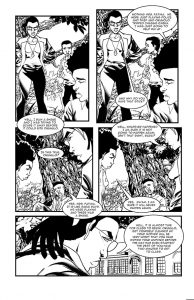