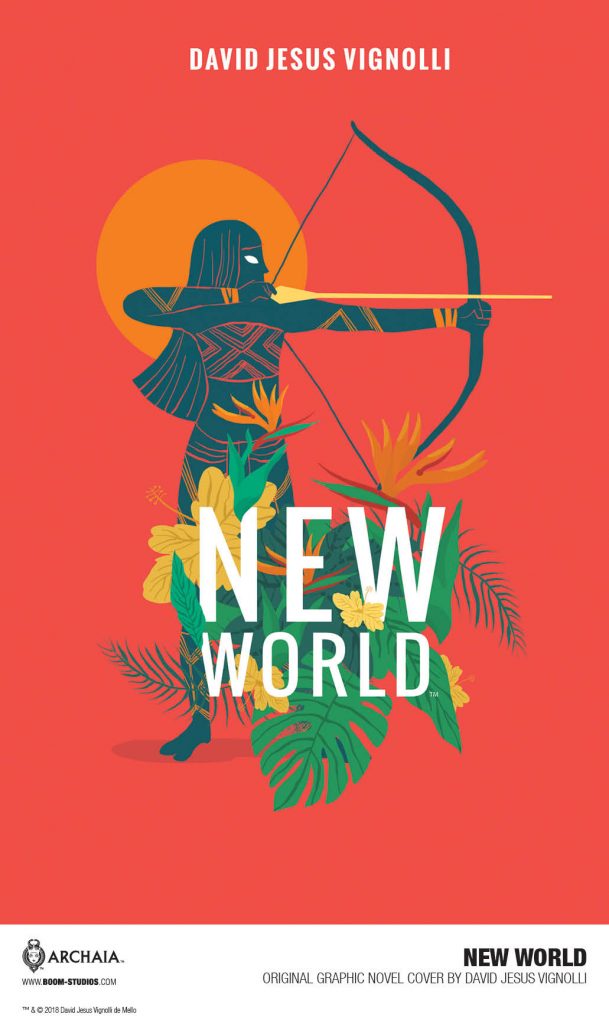 The discovery of the Americas forever changed the landscape of the world as cultures collided with violent consequences. But there’s another story you don’t know, one of a supernatural force that united a heroic trio in opposition – a Native Indian seeking revenge against those who invaded her land, an African musician fighting for freedom against those who enslaved him, and a Portuguese sailor in search of redemption. These three unlikely heroes, connected by fate, will work together to free the New World from the darkness of the old.

NEW WORLD is a timely story about the ways our differences unite us in our darkest hours, intertwining the cultures of Vignolli’s personal heritage to explore the European discovery of the Americas with a vibrant blend of fantasy and history.

“Writing NEW WORLD for me was like digging deep into the roots of my ancestry. I have a black mother originating from the slaves brought to Brazil by Portuguese sailors and a white father whose forefathers came from Portugal and Italy and, somewhere along the way some Native Indian folks in my family tree” said David Jesus Vignolli. “NEW WORLDis set in 16th century around the time America was discovered, and it tells the story of the encounter of those three continents: America, Africa and Europe, through the eyes of a young Native American girl. Although it’s a fantasy it’s based on real historical facts. In a way, NEW WORLD is the story of how I came into being.”

“David Jesus Vignolli has a special voice unlike any other in graphic fiction today – something he showed the world with his incredible debut graphic novel A Girl In the Himalayas and that he takes to the next level in NEW WORLD,” said Cameron Chittock, Editor, BOOM! Studios. “Following his acclaimed debut graphic novel, Vignolli’s latest work tackles powerful and relevant themes with a sense of adventure and, most importantly, a spirit of hope that will resonate with readers of any age.”

Print copies of NEW WORLD will be available for sale in August 2019 at local comic book shops (use comicshoplocator.com to find the nearest one), at bookstores or at the BOOM! Studios webstore. Digital copies can be purchased from content providers, including comiXology, iBooks, Google Play, and the BOOM! Studios app.

For continuing news on NEW WORLD and more from BOOM! Studios, stay tuned to www.boom-studios.com and follow @boomstudios on Twitter.