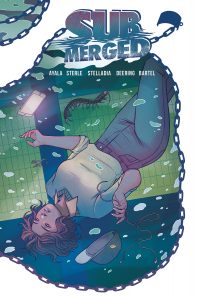 On the night of the biggest storm in New York City history, Elysia Puente gets a call from her estranged little brother Angel, terrified, begging for help. When the call cuts out suddenly, despite the bad feelings between them, Ellie rushes into the night. Finding his broken phone in front of a barricaded subway station, Ellie follows echoes of her brother into the sinister darkness of the underground, desperate to find him before it’s too late.

For fans of dark fantasy realism, Submerged is a tale of modern Orpheus set in the underworld of the NYC subway system.
———-

When her brother calls looking for help, Ellie flashes back to their childhood and all of the disasters caused by Angel’s reckless behavior. Over the years, his acts of rebellion have only gotten bigger, and the fallout more severe. This time, when Angel really needs her, Ellie turns her back on him. It’s only after New York City has shut down in preparation for a record breaking hurricane that she realizes she may have made a mistake. As the storm is about to crash into the city, El tracks Angel down into the subway tunnels where she’ll have to confront dangers aplenty on her own personal Odyssey.

As Vault Comics gets ready to release Submerged in a collected trade paperback in December, I’m happy that I got the chance to revisit the title and review the story as a whole (more or less… #4 is still to come). On my first go around, I don’t know if it was just the shorter format that made it difficult to get into, or if I was feeling particularly flat-headed that day. However it happened, I had trouble finding the story’s meaning and I sort of let it get by me. Now though, given the chance to read through the title’s first three issues in succession, I’m happy to say that I got it. I think that the multiple layers were a little easier to grasp in one continuous narrative,which is how I’m going to be reviewing it, rather trying to keep up with single issue releases. Whether it was the wait in between issues that put me off at first, or the simple fact that I get a LOT of comics sent my way for potential reviews, it took a second look for me to catch the significance of Submerged.

Submerged is one of those stories where nothing on the page is to be taken at face value. Riddled with symbolism, it’s about more than just a sister trying to help a troubled brother. Writer Vita Ayala has done a good job of layering her story with myths and metaphors, all while putting Ellie through an emotional wringer. As Ellie travels through the abandoned subways in search of her brother Angel, Ayala confronts her heroine with flashbacks to her troubled (and troubling) youth, and as the story progresses the reader is able to put together a picture of a less than ideal family life. It’s done in such a way as to catch you a bit off guard as every turn of the page has the potential to bring revelations to the forefront and shed a little light on the thickening plot.

Bringing her own set of skills to play, Lisa Sterle adds layers of her own to El’s journey. At first glance, Sterle’s artistic style seems a little soft for the subject matter she’s covering. With revelations of childhood trauma and glimpses into a very troubled past, a reader might expect a more severe artistic approach on this title. Then again a different approach might have actually lessened some of the impact of the reveals. As it is, Sterle is able to mask the darker implications of the story in her lighter, slightly cartoony style. This is the second time I’ve seen Sterle’s talents brought to bear in a horror comic (check out Long Lost for another great story full of subtle chills), and if this is her niche, so be it. It’s a good fit.

The visual impact of Submerged is further fleshed out by Stelladia’s use of colors. She captures the muted and dingy tone of a deserted New York subway, while keeping the characters clearly visible on the page. The color palette’s also been put to good use showing the different environments where flooding starts to take over the tunnels. Building on Sterle’s artwork, Stelladia helps to create an increasingly oppressive environment as the underground tunnel network starts to fill with water.

Finally, the job of lettering done by Rachel Deering is a solid example of how dialogue and text boxes can be used to help the artwork tell a story without getting in the way. It’s an underrated job that rarely gets the recognition it deserves. Until you’ve seen really bad lettering, you’ll have trouble understanding what I mean. In addition to the obvious text, the backgrounds hold some hidden layers to the story in the form of subway graffiti… In all honesty, I don’t know if that was courtesy of Lisa Sterle or Rachel Deering, but the graffiti as a part of Ellie’s journey was a great touch, and its often pointed and accusatory nature helped to show her emotional place in it.

As a simple adventure following a sister out to rescue her brother, Submerged treads water. As a deeply layered metaphor for coming to terms with trauma and self-doubt, it’s a Michael Phelps among horror comics. There are plenty of superheroes out there, flying around and tossing cars at each other. Why not try something a little more subtle? 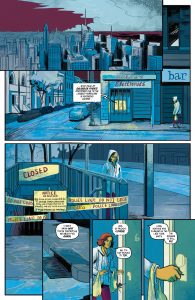 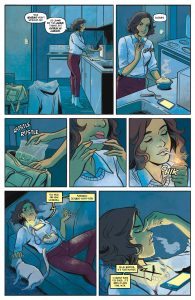 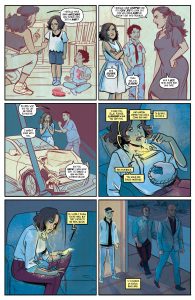 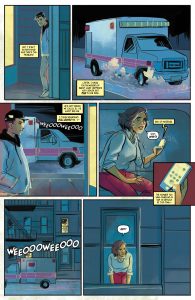 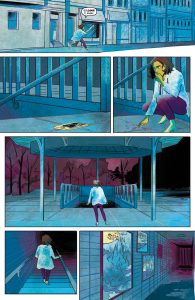