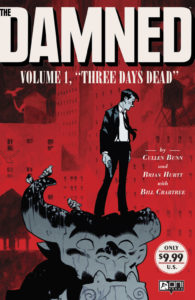 Sometimes, the only person you can trust is a dead man.

Caught in the middle of a sinister web of murder, kidnapping, betrayal, and damnation, Eddie – cursed and unable to rest- can’t escape the city’s most ruthless warring demon gangs. This action-packed prohibition-era thriller combines the supernatural sensibilities of Joss Whedon with the stark reality of MILLER’S CROSSING and THE GODFATHER.

This collection contains all five issues from the first miniseries.
———-

“Lucky to be alive, better off dead.”

This seems to be Eddie’s personal mantra. Cursed by the Verlochin, Eddie can’t die. More accurately, he can’t stay dead. The act of dying itself, that he’s acquired a bit of experience with. If that sounds rough, consider that Eddie’s also gotten himself involved, and in debt, with some very bad people. He’s racked up a helluva gambling debt with one Danny O’Brien, owner of the members only Gehenna Room and former employer of crime boss and demon Alphonse Aligheri. Coincidentally, Eddie’s in up to his armpits with Aligheri as well, and it’s on that dubious and ignoble foundation that this story is built.

At the beginning of the dark noir-style of a story from Oni Press, Eddie is a three day old corpse with flies crawling out of the gaping maw of a slashed throat. As bad as that is, all he needs is another life to take his place in a bloody fashion, and he’s upright and breathing again. Thankfully, or then again maybe not, Aligheri provides the fodder Eddie needs so that the cursed fixer can set about doing a favor for the demon mob lord. If Eddie can provide this service, locating a missing demon of the High Order named Lazlo (seriously, a demon named Lazlo…), Eddie will be free of any and all debts owed to Aligheri and can go on about his business. If said business includes Eddie trying to get himself killed for real, more power to him. From here on out, the story really goes off the rails in the best possible ways. Eddie’s world is full of demons, half-demons, street thugs, and femme fatales. If Mickey Spillane had included a dash of urban fantasy into his books, it would’ve read something like The Damned.

Weighing in at a sizeable 148 pages, this first volume opens up a new series from the creators of the “Weird West” epic, The 6th Gun. The words from Cullen Bunn echo any great tale set in Prohibition America, with all the guns and vice you can imagine. The added layer that Bunn brings in is the demonic angle. Not satisfied with the typical crimes of drugs, booze, and dames, the demon crime bosses in Bunn’s world make their biggest profits from the trafficking of human souls! With an obvious flair for the supernatural, Cullen Bunn’s time with The 6th Gun, pitting cowboys and Indians against the likes of outlaws, zombies, and mummies, carries over into the mob run streets of the 1920’s. The effect is much the same, taking something familiar and classic, and twisting it into something infinitely more sinister.

Brian Hurtt is back on board as well, continuing the artistic excellence he began with his work illustrating The 6th Gun. Everything in these pages rings authentic, right down to the horned demon sporting the double breasted suit and smoking a thick old stogie. Hurtt is able to give us everything we’d expect from a typical crime-noir story, from the swanky/illegal nightclubs to the grimy and rat infested gutters, all revealed starkly and without fanfare. Life on these streets is what it is, unsettling and ruthless in its own right, without any spotlight glaring in to tell us what we should be looking at. It’s all right there, and if you think maybe you saw a blood red eye staring back at you from the sewer grate, it wasn’t just your imagination.

If I’m starting to sound like a ranting fanboy… not gonna like, I kinda am. I’ve burned through Bunn’s and Hurtt’s supernatural western series more than once, and I’m likely to do the same with The Damned. This particular creative team, along with Oni Press, has put out some of my favorite reading material, hands down. The mashing together of classic genres like Western and Crime Noir, with the comparatively new concept of Urban Fantasy is a pretty slick idea. While taken on their own, any of the three kinds of story can be a good thing. If brought together and done well, you get something that’s almost familiar, with a twist that has you looking at it from a totally new angle.

Liquor is the Devil’s Brew, so why wouldn’t demons be out in force to make sure something as ridiculously mortal as the Prohibition isn’t cutting into their business? And why would anyone think that if demons have a stake in the trafficking of goods, it would be anything other than souls? Just ask Eddie… that isn’t something you want to get caught in the middle of. 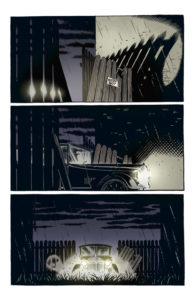 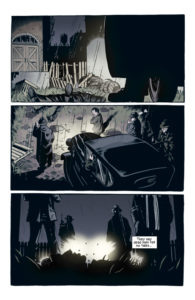 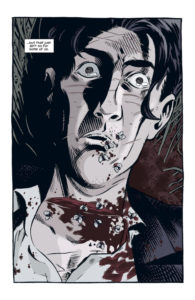 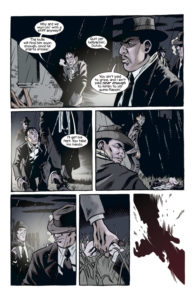 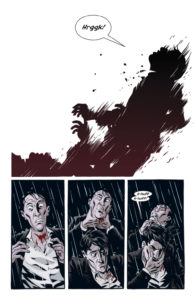 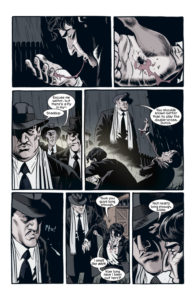