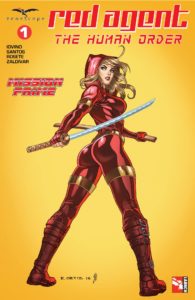 The world has become a dangerous place. Highborns and monsters from the Realms of Power hide in plain sight. Now the world’s leaders are looking to exploit their powers for their own gain, using them as spies and assassins for covert missions. But the Highborn initiative is there to balance the scales with their own group of super powered spies. Led by Britney Waters, better known now as the Red Agent, her team travels the world battling the forces of evil that lurks in the shadowy world of espionage and secret intelligence.
———-

The Realms of Power, places like Oz and Wonderland, have been revealed to our world. The inhabitants of those other dimensional worlds, the Highborn, are often beings of great power and have become feared and hated by many as they’ve taken up residence in ours. A byproduct of that fear becomes apparent when shadowy agencies in our world conspire to use the Highborn and their powers to further their own corrupt goals. To push back against those agencies, The Highborn Initiative is formed. Led by Britney Waters, aka: Red Agent, a Highborn team has been brought together to stand against the darkness.

This first issue opens in true special agent fashion, with Britney Waters in the middle of an operation in Vancouver. The scene starts out with a motorcycle chase, followed by a daring leap to a waiting helicopter, and ends with the obligatory explosion as a terrorist facility is blown to smithereens. It’s a great scene that establishes a promise of action aplenty to be found in this series. It also works as a bit of introduction to Britney Waters, the Red Agent. In addition to looking great in her red leathers, complete with red (riding) hood, she’s a shapechanging werewolf, able to use her lupine attributes to enhance her physical abilities.

What follows is a bit of an intro to the rest of the Highborn Initiative. There’s Avril, the team’s pilot, and her apparent boyfriend Ryder, as well as Eve and final member Ditto. There’s some backstory that’s touched on for newcomers to Red Agent’s cast of characters, Ditto in particular. On a previous mission, Ditto was nearly killed. To save his own life, he used his Highborn powers to upload his consciousness into a robotic body. His memories are muddled and broken, but with the help of teammate Eve he’s working to put them back together. When he does, the story really gets rolling.

Ditto’s recovered memories have revealed the location of an organization that’s been conducting medical experiments on Highborn, where he was taken at the age of seventeen. Now Red Agent and her team are determined to put a stop to these experiments, to prevent any more Highborn children from being subjected to that torture.

In the interest of total honesty, there was a time that Zenescope relied on what amounted to pinup art to sell books. Their adult oriented spins on the Grimm Fairy Tales was racy bread and saucy butter. In more recent times, however, the stories surrounding the “Grimm Universe” have started to evolve and take hold. The writing has improved by leaps and bounds, growing to match the always solid standards in artwork. What we have now is a pretty interesting comic book universe, where reimagined characters from old legends and tales are mingling and evolving into more than caricatures embracing the lowest common denominator.

Red Agent popped up on my radar a while back, and I gotta say that I love the concept. Zenescope has taken Little Red Riding Hood, and turned the eternal fairy tale victim into a lycanthropic badass spy! Now I’ll confess that I don’t know much about the other members of her team, but after reading the first issue in the Human Order story arc, I’m willing to learn. This is a book I’ll be following, and I’m hoping that it builds on what I think is a pretty solid foundation. 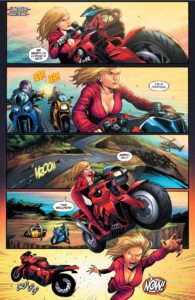 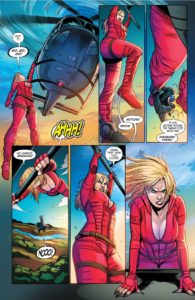 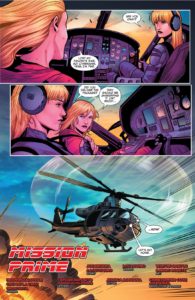 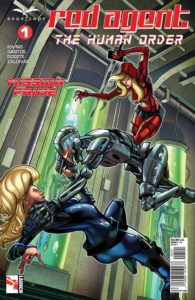 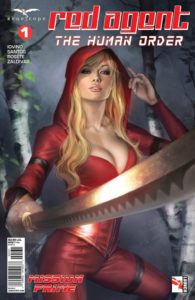 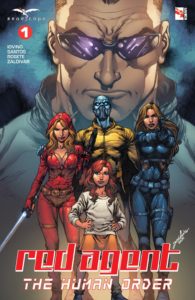