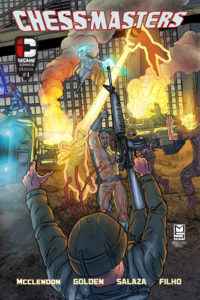 In the 25th century, society has finally emerged as a civilized population. No more wars, illness, hunger, or racial hatred. However, the evil PAWN-MASTER has seen this as an opportunity to control the weak and has been using his eight royal pawns to wreak havoc throughout the city. Conversely, the government has put together an extraordinary team of individuals known as THE CHESS-MASTERS to battle against this corruption and oppressiveness.
———-

The Chess-Masters are a group of super powered peacekeepers hailing from the 25th century, each possessing powers and abilities far beyond those of mortal men (sorry, couldn’t help myself…). They’ve taken a vow, a single overriding precept to which they adhere at all costs: Thou Shalt Not Kill. While admirable, it does complicate their lives a bit when an enemy by the name of Lord Rockwell Longbranch sends them through time, back to our present day. Here, the Chess-Masters must face a military force that is being manipulated by an immortal enemy known as the Pawn-Master, and isn’t held by any restrictions on lethal force.

Insane Comics is an independent publisher that’s fairly new to the industry. I hadn’t heard of them until I went to a small comic show in Milwaukee just last year, and took a sampling of their titles. The highlights, for me so far, have been Hollow Girl (my review here), and Whatever Happened to the Archetype? (review here). A few other noteworthy titles have been SinEater (reviewed by the indomitable and not at all pentameter-challenged Susan here), Death Rattler, Hang Low Aim High, and Night’s Templar. They’ve got a pretty good handle on the genres they publish, covering horror, westerns, sci fi, and straight up superheroes.

Most recently, we at thePullbox were asked to take a look at this series on the Insane roster, and I happily dove in. Now for review purposes I’m going to say up front that it isn’t a perfect comic. The book could benefit from another round of edits, and some of the writing from Bradley Golden & Gary McClendon could use just a touch of polish to make this book really shine. With all of that, it’s important to remember that these aren’t books being put out there by the Big Boys of comics, no sir. This is independent comic book publishing at its finest, and with that comes the inevitability of a few rough spots. It’s to be expected, and really shouldn’t be taking anything at all away from these ambitious creators. I only point it out so that readers can go in knowing what to expect, freeing them up to sit back and enjoy the highpoints of the book.

And Chess-Masters has highpoints. I’m going to go ahead and say right off the bat that the art being laid down by Marcelo Salaza is just plain outstanding. He’s got a pretty great sense of action, and uses perspective to great effect. The character designs are also top notch, with each and every character (with one notable and evil exception… maybe) given a distinct and interesting look. When the writing matches the art, and I don’t doubt that it will given a little time and experience, this will be a book to keep an eye on.

And now I’m going to do something that I don’t generally do… We’re going to take a minute to speak up on some of the social issues that this book very subtly touches on. First, I’m gonna come right out and say it… I am white. Boy am I, too, in pretty much every aspect that’s ever been made fun of in every sitcom at some point in time, right down to my love of classic rock and 80’s action movies. So it is with some sadness that I turn on my television or scan my Facebook and Twitter feeds every day, seeing the discord we have in front of us right now. And I’m not picking sides, folks. There’s plenty of blame to go around, on both sides of the social issue fence, conservative and liberal. We, every one of us, should be doing way better than we have been. And it’s here that I’m going to say that the creators of Chess-Masters might have a better handle on things than many who claim to be “social justice warriors”. In every feature and appearance, the Chess-Masters have the look of multiple ethnicities: black, hispanic, possibly Asian, it’s all there at least to my eye. There was no grand statement made regarding this fact, it just seems that in the 25th century, things like race or ethnicity don’t seem to play a part in society’s scheme of things.

What this said to me was that as a race, that being human, in the Chess-Masters’ 25th century we’ve finally blurred the lines to the point that there finally is just one “color”… sort of a smooth mocha-brown kinda tone… and that there are better things to focus on. I could very well be wrong. It’s possible that I totally misread, or read too deeply into the book, and came away with something totally beyond the intent of the creators. Even if that is the case, does that really matter? The job of a good writer isn’t to lay down in word, tone, and intent, every aspect or minutia of a story. I think that the job of a good writer is to present an idea, to create a thing that can be absorbed by an audience, and then processed so that every reader can input their own ideals and take away from the experience something wholly personal. With that in mind, I read Chess-Masters and took away from the experience the thought that the human race might finally get their shit together to the point that we eliminate the need for constant reminders of who is what race or color, and what these distinctions are supposed to mean. By not taking the time to explain or point out the obvious, that every main character in their story is black, Golden & McClendon have given me the chance to input my own thoughts into what the future might hold (hopefully), regardless of whether or not that was their true intent.

By all means, take a look at this book and see if you think I might be right about any of that… Or maybe you’ll read it and just see a cool looking story about some kick ass superheroes from the future, which it very much is, with no real thought to any social ramifications whatsoever. Honestly, that should really be enough. After all, aren’t we talking about comic books here? We read what we like, and we take away from the experience just what we need to. 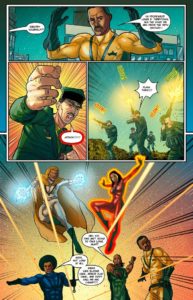 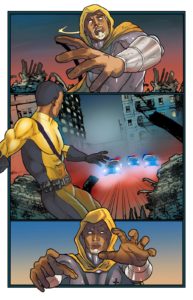 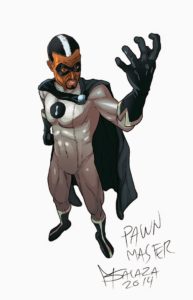