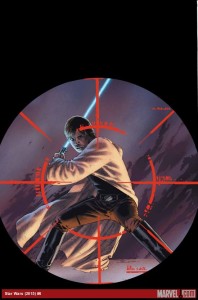 CONCLUSION OF “SKYWALKER STRIKES”! • Luke vs. Boba Fett! Han Solo in hot water! • This is “the comic book you’re looking for!”
——–

So I’ve been reading the new Star Wars series from Marvel Comics, and as sad as I was admit it, I’ve been disappointed. It didn’t bring that “oompf” that I’ve come to expect from Star Wars, ever since seeing the Imperial Star Destroyer loom in over the camera a long time ago, in a county not very far from here. When I saw the original movie on the big screen at the ripe old age of seven, I knew that everything else I’d ever see would just be “not Star Wars”. Even in the latest trilogy of movies, Jar Jar Binks and “baby Vader” couldn’t tear the fanboy feeling that Star Wars was back. In the end, I had to fess up to the fact that in my eyes, even “so so” Star Wars was better than no Star Wars.

So it was with excitement that I picked up the new series started out by Marvel. And it was with a feeling of “meh” that I came to understand that it just wasn’t the same. The first issues didn’t really get me, as much as they tried. The characters weren’t right, their actions just a little off. I couldn’t get past the idea that what I was reading wasn’t really matching up with what I’ve already seen, read, and heard.

And there was my problem, kids. I’ve been a fan of all things Star Wars since 1977 (shut it, I know how old I am). I’ve seen the movies in the theaters(many times). I’ve seen the re-releases (Han still shot first, I don’t care what Lucas says). I’ve read the comics, I even watched that awful Holiday Special and thought it was the most amazing thing I’d ever seen. For the love of all things Force related, I’ve got an old VHS recording of Luke Skywalker, R2-D2, C3-PO, and Chewbacca on the Muppet Show floating around somewhere.

I read the books, the “expanded universe” that was kicked off in the Thrawn Tilogy by Timothy Zahn, and followed it all the way through the New Jedi Order. By the way, if at some point the ongoing movies don’t take advantage of the menace of the Yuuzhan Vong, I’m gonna start writing letters.

Now we all know that the “expanded universe” has gone the way of the dodo bird, right? Lucasfilm and Disney have effectively wiped it all out, erasing all of those stories that kept Star Wars alive for me and countless other fans when there were no movies, in order to avoid the continuity nightmare. And THIS is where my issue with this new series has been. I’ve been comparing the new stories with the old, holding them very unfairly up in front of a candle that’s been blown out and wondering why it didn’t shine.

Issue 6 solved that for me. This was the one that finally got it through my thick skull that they aren’t retreading what’s already been done, that they’re spinning something completely and wonderfully new and I’d better get on board before I was left behind. This issue, we’re treated to an awesomely knock down, drag out fight between Luke Skywalker and Boba Fett. Luke is battered to the floor repeatedly, but refuses to give up. Boba Fett, hired by Darth Vader himself to find the pilot responsible for the destruction of the Death Star, is doing his level best to bring Luke in alive, but it’s proving to be a bigger chore than he’d anticipated. On another story arc, Han and Leia are in search of a good spot to set up a new Rebel base, and their search has taken them to an out of the way backwater world that, according to Han, no one else knows about. He no sooner says the words, and a ship comes in for a quick landing. Han seems to know the ship, and urges Leia to make a run for it, but they’re pinned down by laser fire. The ship’s pilot emerges, and it’s…..

Nope, this is a spoiler free zone, folks. Not gonna do it. Suffice to say that with this one twist in the myth, I’ve finally come to realize that what I “know” about Star Wars is something I’m going to have to leave in the background for now. What’s coming is new, and that’s okay too. From here on out, I’m a brand new fan looking forward to the ride, and trying to keep in mind that all things new aren’t necessarily wrong… But Han did shoot first.