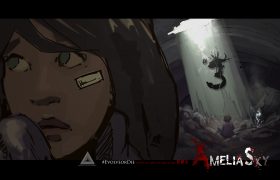 Amelia Sky’s world has been flipped upside-down and sideways. Waking a month after having been separated from her parents during an apparent alien invasion, one which saw the majority of humanity either slain or sent to an off-world sanctuary (and during which her own father sought to kill her to avoid her capture by a mysterious and as-yet unidentified “they”), she finds herself alone in a world now dominated by shriekers, a horrid spider-like alien creature (similar to the invaders in A Quiet Place) which feeds off human life force. Making her way into a ravaged world, she befriends a stray dog, and her adventure through the wasteland to find her parents begins. (10.5/13)