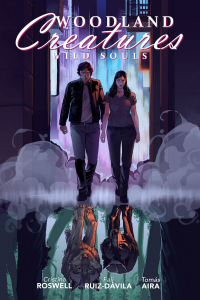 “In a world where almost all links with nature have been broken but the most primitive instincts of the human being prevail, who’s the real predator? They all hide one inside, but only some will want to control it.”
———-
Calliope (Callie) Conway & former Army Lieutenant Christopher Szilagyi are lycanthropes. Their senses are far sharper than any normal human, their strength and endurance are greater, and they share many of the instincts and traits that would generally be associated with wolves. First and foremost among those instincts is the urge, the need, to hunt. Also every lycanthrope is paired with an amaroq, much larger and more intelligent than normal wolves, with whom those like Callie and Christopher share a mental link. Maybe the most remarkable ability of lycanthropes, and the one that could have led to the common werewolf legends, is when they transfer their consciousness into their amaroq, leaving their human bodies behind to take full control of the giant wolves.

Normally, Callie and Christopher’s lives in the wide open and sparsely populated Alaskan wilderness are suited to their nature. Christopher is older and more experienced, and has his less civilized urges under control. He’s taken the younger Callie under his wing, to teach her and help her along until she’s gained some control of her own. For now, however, he has to keep close watch on her as Callie would qualify as a sociopath by every normal human standard. Holding a very lupine sense of survival of the fittest, she views herself as above normal people… better than us, and therefore outside of our narrow-minded standards of morals and laws. Combine those beliefs with hunting instincts that grow stronger as the moons grows fuller, and Christopher has spent more time than he cares to think about disposing of dead bodies and keeping his ward in check.

As this story opens, Callie and Christopher are in New York City of all places… not a great environment for a pair of lycanthropes and their amaroqs, but Chris has been called to a meeting of the United Nations Security Council. The meeting includes his former commanding officer, Colonel Malcolm Harris, and is addressing a proposal to require young lycanthropes to be gathered together for early training and indoctrination. See, there are those in power across the world who are aware of and recognize both the threat and potential benefits posed by people like Christopher. Colonel Malcolm is of the belief that these people and their abilities should be put to use as Special Forces operators, an idea that is strongly opposed by his former subordinate.

So what’re we looking at here, a novel review? An early look at an upcoming graphic novel project, slated to hit a crowd-funding campaign in the spring of 2019 and based on said novel? Yes. The answer to both is yes, and you might wanna grab something to munch on cuz this post is going to be a bit longer as a result.

Woodland Creatures hit my radar through an email I received from the book’s author, Cristina Roswell. She included a sneak peek at the upcoming project, and a synopsis of the story, all of which looked pretty promising. We corresponded for a bit, and after I expressed an interest in her original novel as well as the comic project, Ms. Roswell actually offered to send me a pdf of her personally translated- Spanish to English- version, with the understanding that her English didn’t allow for a book that she felt comfortable releasing. Roswell’s English being much better than my Spanish, me being a big fan of urban fantasy, and (I’m not proud) having a chance to read a book that no one else in the English speaking world was going to read all added up to one enthusiastic part-time reviewer.

So let’s get started…

Woodland Creatures is a book that defies an easy definition. There’s a lot going on, above and beyond its blanket classification as an “urban fantasy”. There are issues of social responsibility versus corporate and government greed. There’s the subject of PTSD, one of the main characters being a military veteran who’s still coming to terms with his experiences during his service. The story also encompasses the potential for a growing romance between the two leads, Callie and Christopher. While many would say that this has all been done before, I’d like to point out that Cristina Roswell has gone to great efforts to make sure that her story stands on its own and apart from the crowd.

Let’s check off a few points.

In Ms. Roswell’s created world, lycanthropes aren’t what most would expect. She’s moved away from the oft-drawn upon well of werewolves, and has dipped into Native American lore. Her spin gives this story a new, less familiar framework in which to work, and it’s a great move on her part. Werewolves have been done to death, and any steps taken to bring a new (or from the Native American standpoint, very old) look to the genre can only help to set Roswell’s work apart from the crowd.

Also to her credit (at least in my opinion), the romance between Chris and Callie isn’t exactly conventional in any way. Roswell has gone against the grain established in many currently published works, and has placed Callie in more of a deferential role to Christopher… not in any misogynistic way, but very much in keeping with Chris’s place as a pack Alpha and the couple’s unique status as lycanthropes. In fact one of the things that I thought was pretty impressive in Roswell’s book was in the way that she kept that very complex relationship true to form from start to finish, without minimizing her female lead at all. In no way is Callie portrayed as submissive or weak- very much the opposite, in fact- but rather aware of her need to conform somewhat to the society she feels no connection to for her survival. To that end, she is dependent on Christopher, relying on his self-control and experience to grow and find her own way. There are going to be some people who are bothered by the relationship, seeing Chris as an overbearing man taking advantage of the younger Callie. All I can say is that if you look at their interactions, keeping in mind that their lupine nature and not judging it based on our own sense of right and wrong, it may not feel “right” but it does start to make sense.

Finally, in regards to Christopher’s status as a military veteran, Roswell has stayed away from the over-used tropes generally assigned to characters like him. All too often in fiction, anyone with military service in their history is either a psychotic killer or a fragile, broken victim of war. Spend any time at all listening to veterans who do experience problems with PTSD on the subject, and they’ll express a growing disdain with the entertainment industry. Men and women who’ve served in the military do have a special set of issues that go along with their status as combat veterans, but it’s never as two dimensional as is often shown. All too often, the sense of pride in their service is overshadowed by the more dramatic and simplistic symptoms commonly associated with PTSD, and these characters are diminished because of it. In Christopher, there are many more layers to explore and Roswell’s story is stronger for it.

In order to avoid the complicated and costly process of having her book translated from Spanish and to more effectively bring her story to an English reading audience, Cristina Roswell has opted for a graphic novel adaptation. Working with her in this process is writer Rafael Ruiz-Davila. It’s got to be a little intimidating to start with a full length book, and take on the responsibility of distilling it into its more essential elements to be told in comic form. The process has got to be further complicated by taking the story from one language and translating it into another. Granted, I’ve only got the ten page preview to go by so far, but having read the original work I’d say it looks like Ruiz-Davila is doing a great job. His dialogue has a smooth, more natural flow to it, without many of the hitches inherent to other translated works I’ve read.

As for the artwork shown in this ten page preview, Tomas Aira has been given the chance to stretch a bit. Roswell’s story opens with some action, not wasting any time to get down to it, and Aira shows that he’s more than up to the task. He’s able to portray Callie as the beautiful, sensual, dynamic and violent walking contradiction that she is. Aira has a great sense of body mechanics in his work, with a fluid use of action as the characters shift from one posture to the next: in one frame, Callie is all languid seducer, and the next she’s full on ruthless murder machine.

If there are any Spanish speaking and reading folk out there perusing thePullbox, I would highly encourage you not to wait, to go right to the source and check out Cristina Roswell’s original work. Based on what I’ve seen so far, she’s got a lot of story to tell and it’s a fine addition to the wide open world of urban fantasy, delving into new ground and not limiting itself to what’s been done. If you do decide to wait for the graphic novel version, be sure to stop by the book’s Facebook page for updates.

That’s all I’ve got (for now)… Keep an eye out, cuz Cristina’s already volunteered to do an interview. In the meantime, I’ve got a tragically empty coffee cup that needs to be tended to. You are now free to move about the cabin. 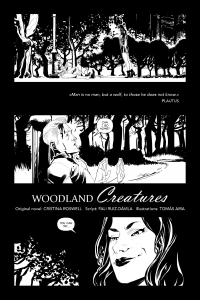 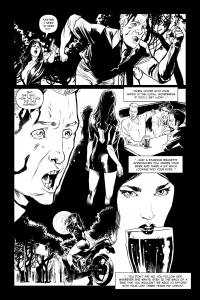 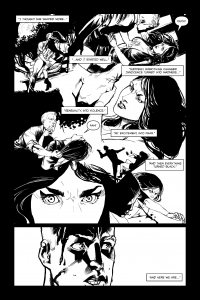 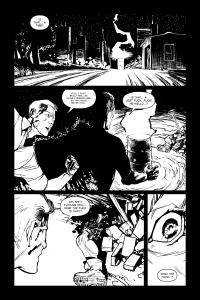 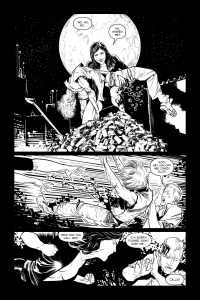 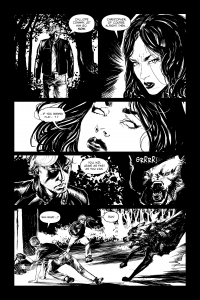 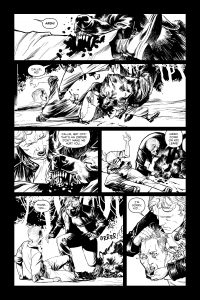 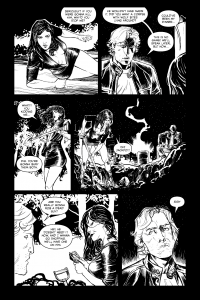 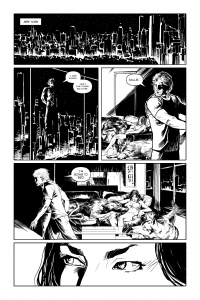 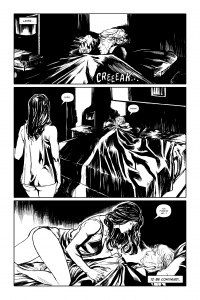