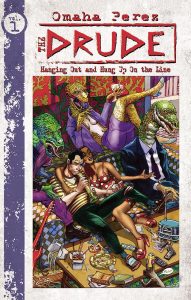 Boris Drude has one ambition in life, to get loaded and have a good time! He can ignore the ghost living in his closet and the fact that his new girlfriend won’t kiss him, but when Reptilian Aliens take notice of him his life goes seriously off the rails! Omaha Perez (Holmes; Super Terre.r) takes a sly look at paranoia gone wild! Mind-bending cover by Tony Talbert (Xeric Award for First Moon) and Paul Mounts!
———-

Nope, that’s it… coroner’s office, Drude, gunshot wound. What the hell is the deal with this book? How is the main character dead before it even starts, what’s with all the lizard people, and why is Prince Charles trying to take over the world? Okay, that last part kinda makes sense… it isn’t like the rest of the world is doing such a great job on its own.

See, this is the thing with The Drude (not to be confused with “the Dude”- totally different fictional character… or is he?). I’m not so sure that there was any point that I wasn’t asking myself what the hell was going on, but I’ll be damned if it didn’t keep me reading from bizarre start to mind-altering finish. Throw in some Carl Sagan, a little David Bowie, and a special appearance by Aleister Crowley, and I think you’d agree that there’s a compelling argument for bulldozing on through this title to the end.

Full disclosure, I had this book bumped to me by Greg, one of the Founding Fathers of thePullbox. He said that he thought it was right up my alley. Now I’m gonna have to consider my life choices, because I’m not sure what kind of crazy train Greg thinks I’m on… but he was right. More disclosure, I have no idea why I wound up liking this book so much, but it got to me like a brainworm digging its way in and making itself at home in there like it was paying rent. Maybe it was the non-linear storytelling (think Pulp Fiction, but with way more hallucinogens), or maybe it was the audacity of the disparate story threads pulled together and managing to make a sort of sense.

At least, they made sense by the time I got to the end.

Hell, I’ve gotta go back and look at this friggin book again.

I have no idea what kind of mind belongs to Omaha Perez, but I’m willing to bet it’s an interesting one. He’s managed to take the outlandish, combine it with the highly unlikely (pffft… lizardpeople), and come up with a concept that defies any definition of the word. The Drude doesn’t so much read as a “story” as it does a flow of consciousness. The writing brings in concepts of String Theory, global conspiracy, & the potential disaster involved if a certain cult leader were ever unleashed on the modern world. I can’t really tell if the fact that these threads do manage to come together is an example of storytelling genius, or crazy random happenstance. In the end it doesn’t really matter. I was entertained, start to finish to the degree that I blazed through the 150 page volume in one sitting…

Let’s just say that to have any clue at all what I’m talking about, you’re going to have to be able to suspend your sense of logic, reason, and anything remotely resembling disbelief. If you can do that, I think that there’s a pretty decent chance that you’ll get a kick out of The Drude, volume 1. And if you do find yourself at the end of the book, proclaiming to an indifferent universe, “Wait, that’s it?” enhance your calm… Volume 2 is coming soon to head shop* near you.

(*Disclaimer: thePullbox does not condone or endorse the use of currently illegal mood altering substances of any kind, nor would we imply that comicbooks might be sold in any establishment that sells smoke products “for tobacco use only”. But if any comicbook were to be sold in such a place, this would be the one. Totally.)