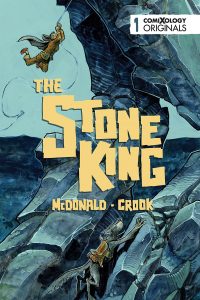 ComiXology, Amazon’s premier digital comics service, debuts issue #1 of the 4-part miniseries, The Stone King, a coming-of-age fantasy adventure written by Kel McDonald (Misfits of Avalon,Cautionary Fables and Fairytales) with gorgeous art by Tyler Crook (Harrow County). The highly anticipated series features a rock giant, a flying dog, and a young teenage thief who must learn to take responsibility for her mistakes.

“As a kid, I always craved adventure stories about girls and fantastical worlds,” said The Stone King writer, Kel McDonald. “I think right now the world needs more adventure stories about girls who’re flawed people. We are seeing more stories centered around girls, but mostly the focus has been on women/girls who are good role models. And it’s important to me to have more adventure fantasy stories where the main character is a girl, but also a flawed individual.”

The Stone King is a fantasy story about Ave, a young woman who is trapped in a life of petty crime. In an attempt to advance the life she desires, the young thief often steals magic moss from the Stone King. One day, she steals a bit more than magical moss and things very quickly go awry. The Stone King goes on a rampage, threatening Stoneport, the fishing and trading city Ave calls home. In order to save the city, Ave must track down the rare gem and return it to its rightful owner to make things right.

“I don’t know if I’m remembering this right, but I think I had a dream about climbing on giants and kept thinking I should come up with a story about them,” said The Stone King artist, Tyler Crook, who is illustrating and watercoloring each issue. “Then Kel and I were talking about how we should do a project together and I said ‘Let’s do something with giants!’ A few weeks later, she showed me the first outline for The Stone King. Our goal is to make a story that will engage the reader emotionally. We want to make sure the book can get into the hands of a kid and they will read it over and over.”

Announced earlier this year at a press conference during Comic-Con International San Diego, The Stone King is part of the comiXology Originals line of exclusive digital content. Starting with the first issue debuting November 14, each subsequent monthly issue will be available to members of Prime Reading, Kindle Unlimited, and comiXology Unlimited at no additional cost, and available for sale on comiXology and Kindle for $2.99. The collected edition will be available via Print-on-Demand exclusively on Amazon.com.

About The Stone King Creative Team

Kel McDonald has been working in comics for over a decade, spending most of that time on her webcomic Sorcery 101. More recently, she has organized the Cautionary Fables and Fairytales anthology series, while contributing to other anthologies likeSmut Peddler and Sleep of Reason. She has also worked on the comics Buffy: The High School Years. She recently finished her creator-owned series Misfits of Avalon for Dark Horse Comics. She is currently working on her self-published series The City Between.

Tyler Crook began his art career as a graphic designer and 3D-modeler. After twelve years making sports video games, he switched to illustrating comics. Tyler is best known for his work with Cullen Bunn on Harrow County for Dark Horse Comics, which received an Eisner Award nomination for best new series in 2016 and won the best ongoing series Ghastly Awards in 2015 and 2016. Tyler remains almost completely analog, still drawing and painting on paper because he enjoys the physical process more than working digitally.

ComiXology, an Amazon.com, Inc. subsidiary (NASDAQ:AMZN), is a revolutionary, cloud-based digital comics service. With content from over 125 publishers as well as thousands of independent creators from around the world, comiXology provides an unrivaled library of comic books, graphic novels, manga and bandes dessinées. The company’s first-in-class innovations include the exclusive Guided View technology which provides an immersive and cinematic reading experience and a new monthly subscription service. ComiXology is based in New York City, with operations in Seattle and Los Angeles. For more information, visit comixology.com and follow the company on Twitter, Facebook and Tumblr.

“Clever, captivating, and utterly unique–this is a gorgeous book, and I can’t wait to understand its many mysteries.  Between the gorgeous art and the clever, concise writing, this is a title to watch.” — Seanan McGuire, author of the October Daye and the InCryptid urban fantasies

– David Gallaher, The Only Living Boy

“[The Stone King] effortlessly immerses you in its world—an exciting and mysterious story rendered beautifully.” –Evan Dahm, webcartoonist of