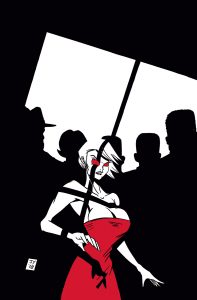 Detective Allie Saxon is not only the first female on the Los Amores police force; she’s also the department’s only vampire. On her first case, Allie learns that on the mean streets of Love Town, magic, money, and power can make anything happen if you’re willing to pay the price.

When famed artist Fillmore Hauser is killed at one of his infamous soirees, Detective Saxon must find the murderer. Despite the house being full of guests, nobody saw a thing. Is this Love Town’s code of silence at play or is there a more sinister explanation? A supernatural noir thriller created by actors John and Matthew Yuan (It’s Always Sunny in Philadelphia, Arrested Development), this month’s issue #1 follows on the heels of issue #0, released in November.
———-

Los Amores, Love Town, is a dirty place, a glamorous place… a dangerous place. It’s the kind of town where being seen among the high and mighty is a double-edged blade with a razor’s edge. Celebrities and crime lords stand shoulder to shoulder, and it isn’t always easy for Love Town’s police department to tell which is which. Added to the mix of your standard run of the mill corruption is the presence of the Infected: werewolves, vampires, and ghouls- victims of a disease that makes them more than human, but relegated to near-untouchable social status.

For Allie Saxon, not only the first woman to make detective in Los Amores but also the first vampire on the force, the job is an uphill climb. Her Captain is more than happy to put her Infection-born abilities to use, but she’s fully aware that to him she’s a means to an end (although I think there’s just a hint of a soft spot in the tough guy’s heart). That end might be out of reach when, on Saxon’s first undercover assignment, the murder of Fillmore Hauser creates a high profile nightmare that the higher ups want solved quickly and to their satisfaction. The only possible witnesses- the Mayor’s wife, an out of work actor, and a ghoulish (literally… he’s a ghoul) gangster- have come down with a case of collective amnesia, and to crack the case Saxon will have to use a combination of finesse, fear, and most likely a fair amount of brute force. Being Infected comes with two of the three right out of the box. The third might take a little more work on her part.

John and Matthew Yuan have put together a very cool little crime noir/urban fantasy title for Devil’s Due/1First Comics. Creating their own dark urban fantasy world without ever really establishing a time period- just hinting at a 1930’s or so setting- they can do pretty much whatever they want without any of the elements seeming out of place. With that degree of freedom, it might be easy to slip over the top into the realm of the ridiculous, but the Yuan Twins have achieved a tone that strikes a balance between classic crime stories & modern storytelling. Their heroine, Allie Saxon, is tough as nails- she’s shot in the head early on in the issue but it just pisses her off- and doing the best she can with her mixed status as immortal vampire, social pariah, and police detective. She’s portrayed with some decent depth in this early chapter of her story, showing awkward uncertainty as she works through troubles both professional and personal.

The Yuans’ artwork is every bit as slick and stylistic as their story, using their black and white format to reflect the crime noir tone for a great effect. Love Town is all sharp contrasts (visually and conceptually), with only the occasional shade of gray to soften the transition. John Yuan’s line work does a good job of letting the action play out as though scripted for a Humphrey Bogart movie, with perpetrators barely glimpsed in heavy shadow. And in keeping with the genre and setting, the character designs brought the old Dick Tracy comic strips to my mind.

With just a preview #0 and a #1 issue in the can, I think that the Yuans and Devil’s Due have put together a pretty solid supernatural crime drama. It’s got all the makings of a hard-biting murder mystery, with a heroine determined to prove herself- as a cop, a woman, and a vampire- in a world that’s set against her making it. All that’s missing is an opening voice over that starts out, “It was a dark and stormy night…” 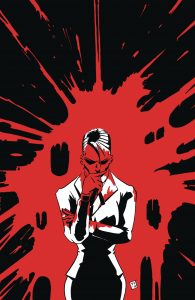