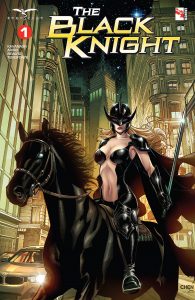 After being given the powers of the Black Knight from the Book of Fables, Peyton Parks has been riding the line of the legal system between attorney and vigilante. Now, with her life finally slowing down, a new threat has emerged from the shadows and Peyton may be the only one with the power to stop it.
———-
Attorney Peyton Parks is all that stands between Nikolai Bakunin, Russian hitman turned state’s witness, and oblivion- both legal and literal. As he’s about to turn over evidence in exchange for leniency for his many crimes, Bakunin is in place to become the victim of the violence he’s perpetrated his whole life. His own crew is out to get him, to silence him before he can do any damage to their Russian Syndicate. What no one (but us) knows is that Peyton Parks is also the (somewhat) armored juggernaut, the Black Knight. Whether she likes it or not, it’ll be her duty to defend confessed killer-for-hire Bakunin for as long as he’s in custody.

Zenescope has carved a niche for themselves in the realm of comicbook publishers, dipping into fantasy, mythology, and fairy tales to adapt the bulk of their titles. While it’s been said that their material relies a little heavily on a “cheesecake” factor, they do put out some entertaining comics. The Black Knight is no exception. Terry Kavanagh is riding the wave established by Robyn Hood, another of Zenescope’s popular titles that takes a character out of legend and molds it into an urban action story. Kavanagh has also managed to sneak in an extra layer when no one was looking, juxtaposing Peyton’s life as a dedicated defense attorney with that of an ulta-violent avenging vigilante. He’s made sure to point out that Petyon’s transformation doesn’t just throw her into a suit of impractical medieval armor and slap a sword in her hand. As the Black Knight, Peyton’s personality is apparently altered by that of the super-powered warrior, and her transformation comes complete with a penchant for limb-severing.

Fully in keeping with Zenescope’s standards, the title’s visual appeal isn’t in doubt. Sergio Arino’s work as an illustrator is on full display, and he shows some solid skills in the realm of classic comicbook action. His action scenes are dynamic and have a good sense of flow, due in part to a creative use of non-linear panel arrangements. Robby Evard’s colors give Arino’s lines a boost, adding depth and using lighting effects to bring a reader’s attention to key focal points in the panels. Putting the final touch to the book’s visual style, Saida Temofonte has taken the ultimate responsibility of the letterer to heart. His dialogue is pretty straight forward and he doesn’t let his text get in the way of the action. Where he does manage to shine is in the sound effects… Sure, “BUDDA BUDDA BUDDA” may not be breaking any ground when it comes to automatic weapons fire, but I just thought it was kinda cool the way he worked it into the imagery- in particular, there’s a “SLSH” that’s cleverly blended into the arterial spray of a severed arm that I thought was pretty slick.

There’s one more point I’d like to point out as praise worthy in the design aspect of The Black Knight. I have kind of a peeve in comics when it comes to women’s footwear, and it drives me a little nuts when I see an action heroine doomed to lifelong arch and ankle problems because she’s forced to go through fight after fight wearing high heels. I’d like to tip my hat to whoever made the decision to give Peyton a decent looking pair of tactical boots. They look like they’ll give her some good support, and the treads on those soles should let her move through puddles of blood on the battlefield without too much slippage.

The Black Knight isn’t going to challenge the works of Neil Gaiman or Alan Moore when it comes to more literary works in the comicbook medium. What it does, though, it does very well. If you’re looking for a gourmet steak dinner, I can point you toward a couple other titles. Sometimes, though, you just want a burger with a side of fries, and that’s not something to be ashamed of. 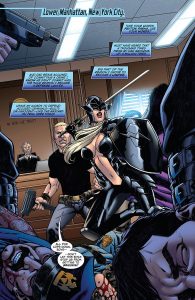 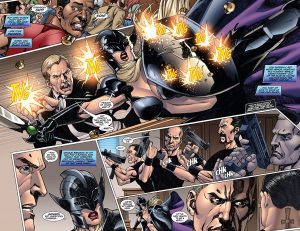 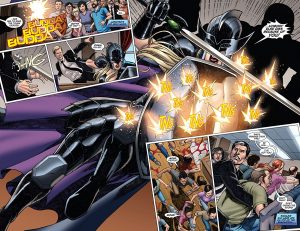 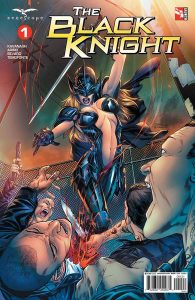 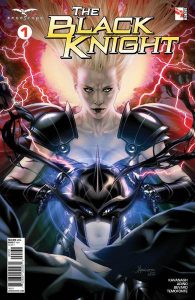 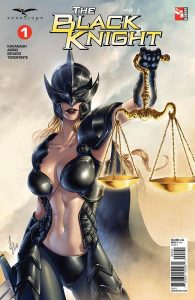 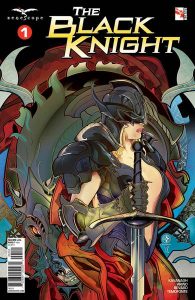