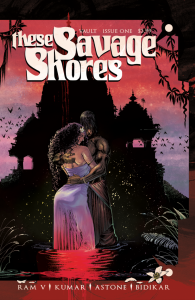 Two centuries after the first European ship sailed to the Malabar Coast and made landfall at Calicut, The East India Company seeks to secure its future along the lucrative Silk Route, in the year 1766. An old evil now sails aboard a company ship, hoping to make a home in this new found land. But he will soon find that the ground along the Indus is an ancient one with daemons and legends far older than himself. Along These Savage Shores, where the days are scorched and the nights are full of teeth.
———-

Alain Pierrefont, fresh off the boat from London, has some catching up to do. His new environment is far removed from what he’s used to, and there are dangers aplenty. Being no stranger to the many hazards this world has to offer, both mundane and supernatural, Alain isn’t impressed with the numerous warnings he’s received. Alain Pierrefont is a vampire, a hunter who walked the streets of nighttime London without a care in the world. What he needs to realize is that he’s not in London anymore, and that vampires aren’t the only things to fear in this world.

After the second story arc in his Brigands series, Ram V is kicking it up a notch. Where Brigands was a great story with layers and twists aplenty, this new series looks like it’s going for “epic” as its primary descriptor. Fans of gothic vampire stories might find themselves salivating a bit, as this tale’s opening issue is told mainly through the eyes and words of Alain Pierrefont. Banished from London by his own kind, a hidden society of vampires unwilling to risk the exposure Alain’s lack of self-control might bring, this guy is everything fans of Anne Rice could hope for. He’s got that debutante air of superiority, the somewhat edgy attitude of someone who believes he’s at the top of the food chain, figuratively and literally. But what’s really interesting to me is that Alain isn’t the only predator out there.

Honestly, we’ve all seen the vampire story. There have been books, TV shows, movies, more books, roleplaying games, and books, all depicting the world of darkness inhabited by children of the night. Thankfully, Alain doesn’t sparkle… I don’t know if I could’ve handled that. In most other ways, though, we’ve seen him- many times- in some way, shape, or form. Therefore, it was with some interest that I dove into this title when I realized that it had vampires in it, but it wasn’t really about vampires.

So, what’s it about, smart guy?

I’m glad you asked, and I’m sorry if you’re mad at the disregard I’m showing for the blood sucking undead. If it makes you feel any better, I’m kinda over zombies, too.

What makes this title so much better than others that have used aristocratic leeches as storytelling devices? First and foremost, I’m gonna go all fanboy and say that it’s due in large to Ram V. I recently blazed through Brigands– arcs 1 & 2 (another title I can’t recommend highly enough…)- and jumped straight into this one when I got my grubby mitts on it. The guy can write, and he’s found his way onto the list of people whose books I’ll pick up just because I see their name on the cover. As in Brigands, These Savage Shores looks like it’s going to be populated by some very well thought out and fully realized characters. Even folks who aren’t around for more than a panel or two come across as though they really do have something to say and lives to lead outside the boundaries of the page. No fluff or filler here, just solid writing and great dialogue. Now if I can take a little more of your time to sell it, the fact that Ram is going to the seldom-tapped well of Hindu lore for his story adds more flavor than a dozen vampires… even (especially) the sparkly ones. The first characters introduced are Kori and Bishan, lovers separated by more than socio-economic status. Bishan is apparently a being of supernatural origin, in his own words “made from the blood of gods, descended from one of Seven Sages.” After doing a little bit of homework, I found that Ram V might be referring to the seven Saptarishi who are recognized as the ‘mind-born sons’ of Brahma, the four-faced creator god of Hinduism. I’d like to point out that whether or not these are specifically the mythical beings to whom Ram V is referring, the concept still got me digging into some legends and lore with which I’m not very familiar… and yet another trip down the Google rabbit hole began.

As in all things comicbook, you can have the best writer in the world putting in their due diligence, but if you don’t have a good artist on hand all you’re doing is putting out a very short book. Don’t you fret, because the most outstanding Sumit Kumar- also fresh off his work with Ram on Ruin of Thieves: a Brigands Story- has once again put out some gorgeous pages with which to fill your eyeballs. I think that if I were to look for a comparison in Kumar’s work, it’d be most recently (and impressively) found in the pages of Batman: White Knight by Sean Murphy. Not only does Kumar do a great job presenting dynamic characters in action, but he also lays down some gorgeous backgrounds. Whether it’s an ocean view seen from the deck of a sailing ship, the candle lit halls of an imposing gothic castle, or a jungle clearing in flickering torchlight, there’s always something to make you stop and go “oooh, pretty”.

Maybe not out loud… whatever. Moving on.

As great as Sumit Kumar’s line work is, said flickering torchlight would no doubt be a little less impressive if not for the efforts of Vittorio Astone on colors. Everywhere in this book, the efforts of a colorist were put to the test, and Astone pulls off some outstanding effects. If I had to pick one thing that really visually set the tone for me, it would be in the lighting. It’s never dull, never too dim or too bright, and every environment had its own feel… hell, the dusty sun baked streets of Calicut practically had me needing to wipe the grit from my eye.

Now when it comes to a title’s lettering, it isn’t always easy to find something to say- good or bad. A letterer has to be very careful, to present their work without distracting a reader from the story or its images, but every now and then they do get the chance to show off a little. In this case, Aditya Bidikar gets to strut a little and it works beautifully. In the 1700’s, a primary form of communication was found in the written letter. That fact is put to good use here as Bidikar gives us Alaine’s narrative text in a flowing but still very readable script, often presented as though done by hand on paper. It’s just a little more flavor thrown into a meal that already has plenty to chew on.

These Savage Shores looks like it’s going to be a title with a little bit of everything tossed in, like a great big salad bowl of awesome. Fans of the supernatural in all its forms, romance, action, and intrigue should have no trouble finding something to love about this book. Give this one a try, and I challenge you to write me back to change my mind. 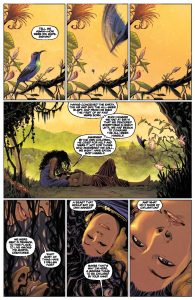 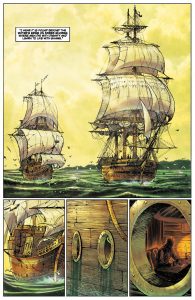 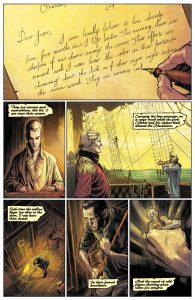 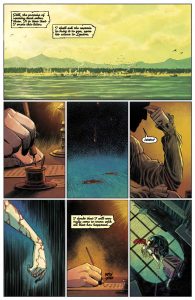 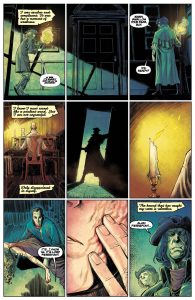 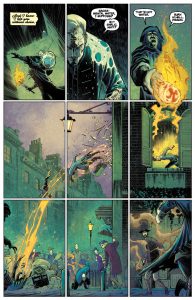