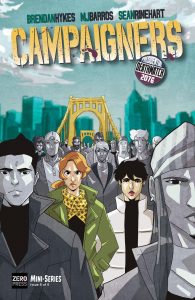 A random encounter with a reporter on a bad day left Kydra Franks in an uneasy spotlight. Urged on by her best friend, Bee, Kydra used her sudden notoriety to lead a protest march ending in a riot at the hands of the police, and Kydra arrested for sedition. Rejecting a request from the President to denounce her previous statements, Kydra went to trial…
———-

Believed by many to be the voice of her generation, Kydra Franks was just along for the ride. From the day her rant against the bloody “electoral process” went viral, she’s been reacting to her circumstance rather than exerting anything resembling control. Bestie Bee has been the voice in her ear, urging her on with no thought to the consequences Kydra might face as a result. Those consequences have hit home, and when it looks like Kydra is going to be the latest casualty to be ground beneath the wheels of the Political Machine, help will come from an unlikely source.

Back when I received the first couple issues of Campaigners from creator/writer Brendan Hykes (full review of issues 1-3 here), I thought that the concept he’d come up with was a less than hopeful statement on our political system. What worked out very well, at least for me, was that the statement didn’t really beat down on one ideology or another. Instead, Hykes used an extreme projection taken to outrageous lengths in order to tell a story about self-determination over civic responsibility. In his created world, Presidential elections are based on trial by combat. Candidates step into a ring and duke it out to determine who will run against the incumbent, and in many cases it turns into a battle to the death (the current President usually issues an immediate pardon, clearing the winning candidate of any murder charges). When Kydra speaks out against this ludicrous system (what next… a process by which leaders are chosen by watery tarts lobbing scimitars in their direction?), she takes her first steps into the life of a social justice warrior.

Turns out, that life kinda sucks. Everyone around her has all of the advice in the world, telling her what she should be doing with her newfound fame, but no one has anything substantial to offer her when it comes to dealing with what comes after. Put on trial for sedition, the only practical advice comes from President Lennox himself, a former defense attorney who admits to her that things have spiraled so far out of control, she has no “good choices” left to make. All she can really do is mitigate the damage that’s been done, cop a plea and hopefully avoid a death penalty for her crimes.

Now that the fifth and final issue is out, I’ve had to admit to myself that Campaigners is kind of a tough story to review. Don’t get me wrong, it has nothing at all do with any of the political or social commentary involved. The biggest problem with the story overall lies with Kydra. When I read the five issue series from start to finish, it struck me that she has absolutely no bearing on the outcome of the story. Then I read the entire run a second time, and thought to myself that as far as characters go, “yup, she’s a terrible protagonist”. Kydra has no arc that I could find, despite a hopeful start with her initial rant against the establishment. From that single moment, she goes from interesting and outspoken hothead to a total passenger in her own story, passive and rudderless. Bee, not much better, is sort of a demented Jiminy Cricket who whispers things in her ear and convinces her to make a stand against the status quo. Only it isn’t Kydra’s stand… it’s Bee’s, and rather than take it herself, she continuously urges Kydra to face all of the slings and arrows in her place. What’s even worse, I never really found Bee’s ideology to be all that strong either. She genuinely seemed more interested in her social media profile and how many “likes” she could get out of being Kydra’s bestie. For a story’s primary and supporting character, Kydra and Bee were kinda losers.

And then I thought about it… The single character in Campaigners who actually has a story arc, despite his lack of on page presence, is President Lennox. The President starts out as the literal figurehead, signing blank documents for Congress without a clue as to what he’s agreeing to (at one point he remarks something to the effect of, “for all I know I just declared war on Canada”). The real power lies with the Presidential handlers who tell him where to stand, what to say and when to say it. It’s only when he sees Kydra online, listens to the anger in her voice as she declares that the process by which Lennox was placed into power was no way to select the leader of a country, that he starts to tug against his leash. Over the course of the five issue run, it’s Lennox who actually develops as a character, rethinking his political career and remembering what it was supposed to mean.

And then Campaigners went from a title with an interesting premise, but an astonishingly uninteresting main character in Kydra, to one that takes what at first appears to be a background character and sneaks him in as the true hero. It might be Kydra and Bee on all of the covers, but it’s President Lennox who actually affects the story and follows his own development through a recognizable arc. I have no idea whether or not this was what Brendan Hykes intended as he was writing Campaigners, but regardless it was that little “rope-a-dope” that I thought made the title really stand out.

So I’ve gone on a bit about the story itself, but Campaigners is a comicbook, and comicbooks have artwork. Artist MJ Barros has brings her manga-esque style to a very character driven story, that sees most of its action in the early issues. Other than a look at the electoral process and a riot or two, it’s mostly just folks standing around and talking. Barros has instilled her character designs with enough detail to make them visually interesting and very distinctive- not always easy for a black and white that isn’t heavy on the action. Kydra has the wide-eyed innocence of a lamb being led to slaughter. Bee looks every bit the thoughtless self-absorbed teenager, right up to the point where she realizes that her advice may have gotten her friend killed. Lennox looks like the aging prize fighter, all facial scars and graying hair, who has to step up to take his place as an actual leader. Barros brings it all to the table and does a great job of it.

This is the part where I’d like to say how the lettering by Sean Rinehart stood out and made the story, but I can’t. Which is kinda the point, isn’t it? The lettering isn’t supposed to overshadow the events on the page, giving the reader the chance to take in the written word without drawing attention away from the art. Rinehart’s lettering is by no means dull or bland. It does everything it’s supposed to do, and for that Sean Rinehart can take his place among the unsung heroes of comics.

Campaigners is a very different kind of story that should be read and appreciated for all of its quirks and subtle… also not so subtle… jibes at a system that’s eating itself alive. The five issue run has come to a close, and let’s be honest. What else were you gonna do with that time? Watch a debate?

I am Paul from thePullbox, and I approve this message. 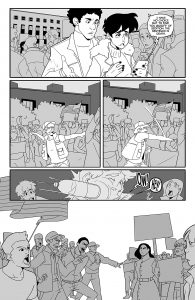 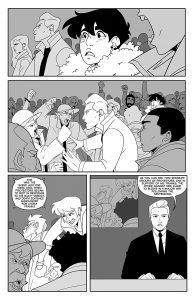 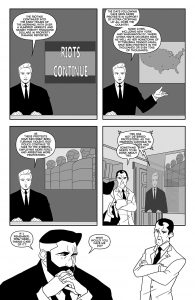