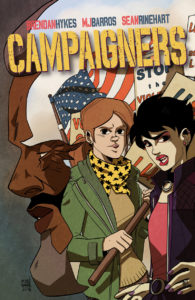 The year is 2076. Kydra Franks is a high-school girl turning 18 on Election Day. But Presidents are chosen in a very different, very brutal way. And Kyd has a lot of problems with the current state of affairs. When she publicly airs her grievances, will the country take notice?
———-

With the American Tricentennial fast approaching, the Presidential election is looking to be a spectacle. Incumbent President Lennox is being prepared for the big show, training hard and staying strong for the coming fight. Meanwhile, his future competitors are doing the same thing, only the fight ahead of them is a little more than just hyperbole. At the Presidential Debate, nominees will step into a very literal ring on behalf of their respective political parties, and the one left standing will be the one to run against President Lennox for our nation’s highest office.

Kydra “Kyd” Franks is a typical high school girl experiencing very typical social dissatisfaction. She’s not happy with a system that uses brutality and rigid laws to control the governed, and in a burst of temper she speaks out against it on a live news broadcast. Kyd’s not interested in taking part in the ridiculous system of government that broadcasts physical violence to the masses, using it as a tool to decide who leads. The video goes viral, and without Kyd’s knowledge or cooperation she becomes the rallying force behind a growing movement. Kyd’s rebellious nature has started something, and now it’s pulling her along for a ride she’s not sure she wants to be on.

Bianca “Bee” Flynn is Kyd’s best friend, a rebellious transgender girl who refuses to bow to social convention and legal definitions of gender. Her desire to see social change, and increase her Twitter following along the way, may have had something to do with Kyd’s growing impact on social media (#ImwithKydra). Bee takes every opportunity to indulge in some name dropping and pot stirring, and the result is a social movement that’s sweeping the country and getting ready to march on Washington D.C. What she doesn’t really seem to get is why Kyd isn’t happy with the extra attention she winds up getting, even from the death threat crowd. Any publicity is good publicity, right?

Over the course of the first two issues in the series, Campaigners establishes a future that’s not too far off point, equal parts cynical and optimistic. Okay, probably a little more cynical, however it’s worth noting that in this future we do have a three party system of government, and women are treated equally in their contention for the office of President. So there’s that…

All of this is derived from the obvious disdain and disregard the government holds for the governed, and active unrest is the obvious and inevitable result. When Kyd shows up at the protest rally in issue #3, she’s amazed, and a little bit terrified, by the sheer numbers showing to voice their discontent. As she points out, the government has been ignoring the people for too long, and it looks like the people are getting a little tired of it.

Other social commentary, as far as I gleaned from the series so far, is a little more abstract. We see the impact that social media can have on society, and how the media can manipulate (and be manipulated) to represent public opinion over facts. Public figures, and in this case public servants, are treated more like prize thoroughbreds, trotted out with prepared speeches and spoon fed only the information they need in order to present the desired set of sound bites. According to the world portrayed in Campaigners, herd mentality is the rule and click bait is king.

To his credit, President Lennox himself seems less than satisfied with the role he’s being told to play. As the story progresses he starts to show his own rebellious streak, voicing concerns over blank papers he’s given to sign (“So, maybe I just declared war on Canada?”), and speeches he’s told to make without the benefit of having any input in them. Most notably, President Lennox is less than thrilled with the prospect of using force against the protestors, and the stated plans to railroad teenaged Kyd into charges of sedition.

The other very prevalent bit of commentary is found in Kyd’s friend, Bee. As a transgender teen, she lives with the constant reminder that she doesn’t fit societal norms. She’s bullied at school, by classmates and faculty alike, and to her credit she’s determined to live her life her way. Outside of school, however, her situation is shown to be a little more precarious. When mortal combat is used to determine who rules, it comes as no surprise when law enforcement openly reflects that morality. Bee is approached by police and called out on her gender. When she tries to stick up for herself, she’s physically hit and told “don’t you dare talk back to me!”

Mostly, it’s easy to see that the creative team has a lot to say, and they’re taking this opportunity to say it. The obvious dig is, of course, at our political system. Seriously, when you look at it we’re not really that far off. We have one candidate who in my opinion (disclaimer: the following are the opinions of the writer, and do not reflect the views and opinions of thePullbox as a whole) got as far as he has based on brash assaults, albeit verbal. The other candidate has been fighting tooth and nail to avoid a constant barrage of scandal and controversy. If the two actually came to blows in the upcoming Presidential debate, I don’t think anyone would bat an eye…

The heavy themes covered in Campaigners can’t be ignored, but they can and should be talked about. In that regard alone this should be an important book to read for anyone who feels strongly about any of the issues covered. It should also be noted that these issues, while a definite factor in the story, aren’t swung around like bludgeoning instruments. There’s plenty of humor inserted to give the readers some relief.

My bottom line is that this book isn’t going to be for everyone… then again what story worth reading ever is? That is the one beauty of the freedom of choice, and could easily be interpreted as a theme covered in Campaigners. As a consumer, you have the power to affect change through the purchases you make. It’s a vote, pure and simple. Exercise that power as you see fit. 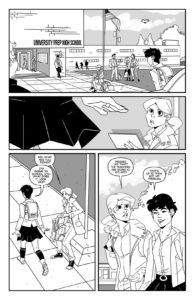 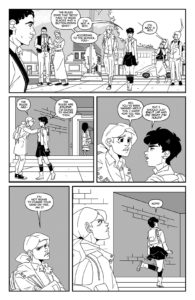 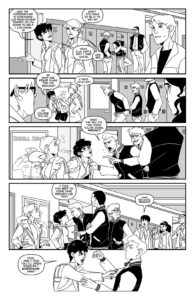