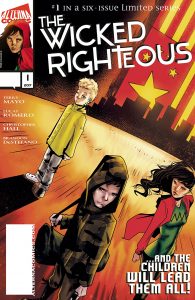 When the plague hit, no one really knew what it was. There were theories, the big ones being that it was either a biological attack or the Rapture gone horribly wrong. Whatever the origin of the devastating epidemic, it left children largely unaffected, as well as- oddly enough- adults with a history of violent behavior. What is left behind is a world that could have Mad Max asking for a do-over. In the San Diego of this brutal new world, four brothers fight to keep their humanity, their faith, and each other alive.

Lucas, one of the four brothers, is a kind soul in a place that doesn’t encourage soft and squishy things like pity, generosity, or compassion. On his supply runs, scouring the ruins of San Diego for anything useful to the family he has left, he has been leaving care packages of food for loner J.C. What Lucas doesn’t know is that J.C. is a young lady on the run, and when the brutal Horsemen gang target her for obviously nefarious reasons, the young crusader intervenes.

The post-apocalyptic story has never totally died out of the collective consciousness, but there seems to have been a resurgence in recent years. I’m gonna thank Fury Road at least in part, but you can feel free to hold onto your own ideas. Whatever we owe it to, the genre’s burst back into the entertainment industry’s forefront has brought us both good and bad. Happily, The Wicked Righteous has more than enough going for it to merit a place in the former category.

Avoiding the long abused tropes of nuclear holocaust and zombie apocalypse, creator/writer Terry Mayo has gone the route of a biological plague as he wipes out much of the populace. He’s also stayed away from specifying a “who, what, or why”, focusing his attention on The Now, the occasional flashback giving it all some context. Where I felt Mayo had focused his story’s spotlight was on the relationship of Lucas and his brother Matt, and later on the growing relationship between Lucas and J.C. Where the brothers are concerned, contention is a way of life as their sibling rivalry puts them on the edge of disaster more than once. With J.C., Lucas is faced with the subject of his increasingly vivid and occasionally prophetic dreams.

Visually, The Wicked Righteous has a lot going on as Lucas Romero does everything in his power to keep pace with a fast-moving & densely packed narrative. He’s been given a lot of characters and situations to work with, and has done a pretty admirable job of making the whole thing come across as a cohesive story. Romero’s style carries a manga-esque visual tone, relying heavily on extremes when it comes to facial expressions and body postures. The upside is that you never have to guess at what a character is feeling at any given time, while there are occasionally some pretty significant mood swings from one panel to the next that might leave some readers wondering what it is that they missed.

Rounding out the look of The Wicked Righteous, Christopher Hall’s colors do a fine job of keeping up with the changes in mood. Hall also upholds the manga tone when it comes to highlighting the action sequences… and lest I forget he gets to go to town with copious amounts of blood splatter. In the same vein, Brandon DeStefano’s letters do their part to emphasize the moods- from sad to glad to mad- and effects on the page, without getting in the way of the action or interfering with the characters.

Throw in a collection of interesting, if not all fully realized on the page, characters like Uncle Abe, Cross, Berg, and tween psychopath Billy, and there’s plenty going on in this twisted world of violence and upheaval. If there were a single fault I might have with The Wicked Righteous, it’s just that it feels like it was meant to be a longer series. In the six issues it’s been given, there are leaps in both mood and narrative, and it felt to me like Mayo was trying his best to include as much content as he could in the space he was given.

Overall, The Wicked Righteous is well worth the investment, whether it be in picking up the single issues, or jumping on board the Kickstarter campaign in progress to bring a collected trade paperback into being. There’s always something happening on the page, with no wasted panels to be found, and the result is a fast-paced action tale that sets itself apart from the horde of wastelanders and warboys roaming the post-apocalyptic landscape. 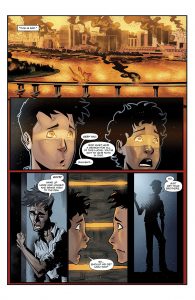 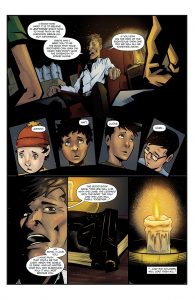 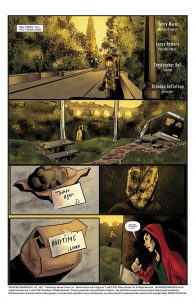 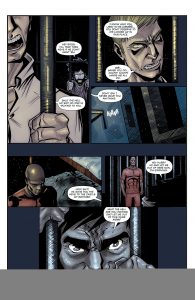 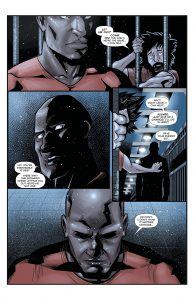 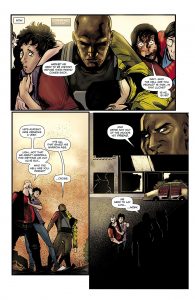