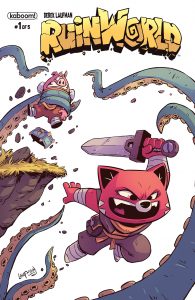 Intrepid adventurers Pogo and Rex are on a quest for fame and fortune. Their discovery of a special map leads them on an epic journey through dangers, demons and old enemies. Just one problem—they’ve already lost the map.
———-

Seems like it’s been forever since I first got wind of this project from artist Derek Laufman. His artwork covers pretty much all things pop culture, sticking largely to the signature “Chibi” style of art with a few notable exceptions that branch out into sort of a Disney animation look. I became a fan pretty easily, following his progress on Ruinworld through social media and when I found out that Laufman’s title was being published by Boom! Studios, it seemed like a perfect fit.

So what is “Ruinworld”?

Glad you asked. It’s an epic (sort of) fantasy, following the path of Ruin Hunters Rex and Pogo as they travel the land in search of hidden treasures and lost relics. On their latest misadventure the two stumble onto a map that, according to somewhat bumbling comic relief Pogo, will lead them to a legendary lost treasure vault. Rex, the brave and heroic warrior, needs no other urging to take up the challenge.

The hunt is on!

Derek Laufman has put together a fast-moving buddy adventure/comedy, using cuddly anthropomorphic animals (sort of) in place of larger than life action figures… and it works. The dialogue is quick and the characters are pretty easy to figure out, with no deep rooted ulterior motives (so far). Rex is the easy to spot hero, quick to jump into the fray and test his mettle. Pogo isn’t quite so courageous, or dynamic, and doesn’t always make the best choices (case in point, he’s a Ruin Hunter who really doesn’t care for the life of adventure and danger that tends to follow).

Not totally a one-man show, Ruinworld is helped along by some pretty creative lettering from Warren Montgomery. While not overthrowing Laufman’s fantastic work on the page, Montgomery still uses some pretty slick tricks to highlight totally highlightable things. I’ve said it before, but I don’t think letterers get much credit in general so I do what I can to make note of the noteworthy efforts. Without them, it ain’t reading… you’re just looking at pretty pictures.

Having easily established his credentials as an artist, Laufman’s dip into the world of comicbook storyteller is off to a fine start. The opening issue for his labor of love promises lots of fun things to come, with all the action and adventure presented in an easy to digest style. The bonus is that while being very family friendly- the most disturbing thing so far has been a youngster with a case of the “snoots”- Ruinworld isn’t at all a drag for adults.

At least, not this adult… but according to my wife that isn’t really saying much. You know what, doesn’t matter. It isn’t a crime to be easily entertained, and darn it entertained by this book I was. Give it a shot and see for yourself. Just don’t be expecting any movie deals signing Jason Momoa as “Rex”.

You know what? I would totally watch that animated feature… 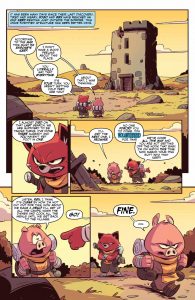 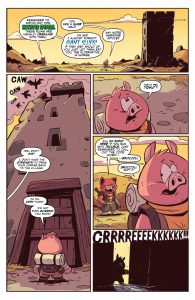 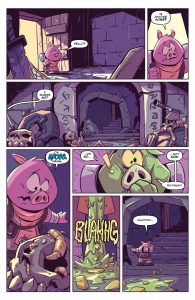 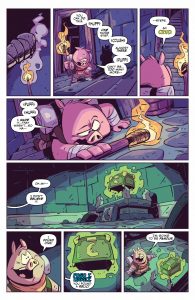 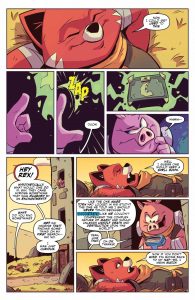 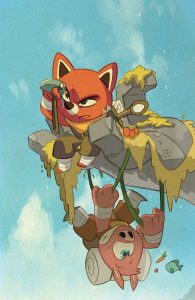 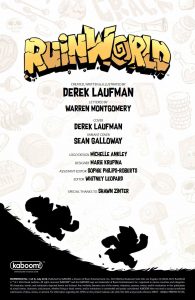