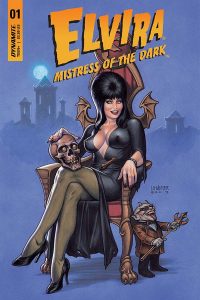 The Mistress of the Dark has become unstuck in time! Elvira crashes Mary Shelley’s monster weekend, beginning an epic journey through horror history, stalked by the most terrifying nightmare to ever walk the Earth. (No spoilers!) Writer David Avallone (Bettie Page, Doc Savage, Twilight Zone) and Dave Acosta (Doc Savage) bring you the thrills, chills and double-entendres in the first chapter of this four-issue miniseries!

Played by actress-writer Cassandra Peterson, Elvira, Mistress of the Dark has carved out a niche in popular American culture that is sure to endure for decades to come. Elvira’s reign as ‘Queen of Halloween’ has now spanned thirty-five years and includes two nationally syndicated television series, two feature films (Elvira, Mistress of the Dark and Elvira’s Haunted Hills), an IMAX movie and two motion control rides. She has appeared in National ad campaigns for Pepsi and Coors, recorded five music CDs, written four books and licensed over Four Hundred products including pinball machines, action figures, guitars, three comic book series, a beer, wine, soda pop, perfume, slot machines and the best-selling female costume of all time.
———-

Come with us now, oh readers of the macabre, purveyors of gothic horror. Answer the call and bear witness to the terror, the fearsome presence that is… Crap, this is an Elvira comic? Forget all of that other stuff, just settle yourselves in for a buttload of quips, cleavage, and thinly veiled dirty jokes.

In between takes on the set of her latest movie masterpiece (heh), Elvira enters her trailer and is whisked through a swirling vortex, to another world. It happens… how else do you explain Carrot Top? On the other side, the Mistress of the Dark finds her charming self in the company of none other than Lord Byron, Percy Shelley, and Mary (soon to be Shelley) Wollstonecraft. The trio had been searching for their friend John Polidori, snatched up by a shadowy fiend barely an hour before.

I hope that’s enough setup for you guys, cuz if I’m being honest that’s about all I’ve got. Elvira, the perennial societal outcast, finds herself transported through space and time, and now must solve the mystery of how and why so that she can find her way home before her movie contract expires. The good news is that if you recognized Elvira on the cover of a comicbook, and you thought “I gotta have it!” you already know what kind of ride you’re in for.

Rest assured that fans of Elvira, with all of her (heh) charm & wit should be satisfied with what David Avallone has laid out for them. Throughout the issue, while I was reading Elvira’s dialogue I heard Cassandra Peterson’s voice clear as day in my head. I have no idea how much “research” Avallone had to do, how many hours of Elvira’s television show he had to watch to get it all down, but if there was a model for distilling all of the traits of a well-known pop-culture icon onto the page, I’d say that David Avallone has got it down pat. My wife kept asking me what I was snickering about, and when I’d read her one of Elvira’s lines all she could do was give me a spousal eye roll. Eventually, she stopped asking.

Hey, while we’re talking about the traits for which Elvira is most known (heh), let’s give some credit where it’s due: the artistic team of Dave Acosta, Andrew Covalt, & Taylor Esposito have done their due diligence. Acosta pulls no punches, rendering each line with love and care to bring our temporally displaced heroine to two-dimensional- and gravity defying- life. On colors, Covalt does a fine job of making sure the entire cast of characters remain bright enough to follow on a dimly lit, gothic inspired backdrop (fitting, since Mary Shelley did have a bit of a hand in defining Gothic Literature). For that matter, Esposito is given some room to play, his lettering- while mostly innocuous- manages to creatively spotlight a few of the gags that I thought were a highlight in the issue.

Look, kids, I’m not gonna sit here and try to tell you that Elvira, Mistress of the Dark is going to change the way you look at comicbooks. I’m not even going to imply that it’s a reimagining of a cultural phenomenon. What I am going to say is that from start to finish, I was entertained by this run’s opening issue. The humor was dead on, with just enough slyly suggested corn thrown in to uphold Elvira’s lofty standards of bad taste. Her self-aware brand of humor acknowledges the obvious points of contention with a nudge and a wink, creating a more relaxed atmosphere in which to enjoy the ride. This isn’t Meryl Streep… it’s freakin’ Elvira.

Where the series goes from here is anybody’s guess, but if it remains just a series of one-offs bouncing (heh) Elvira through time, visiting one literary figure after another, it could still be an entertaining trip. That is why we still read comicbooks, isn’t it? 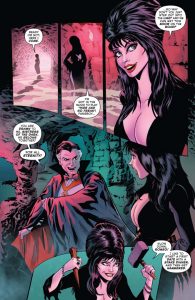 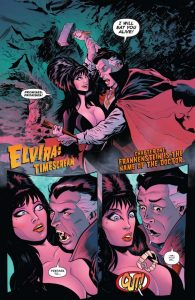 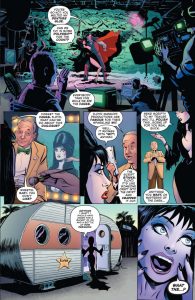 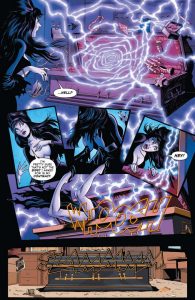 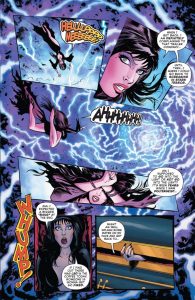