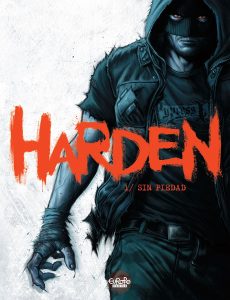 Ismaël seems like a regular nice-guy fallen on hard times. He’s living with his adoring sister and her son following his return from his posting in Iraq. But he has a dark past with the gangs of L.A. and an even darker one with his combat experiences in the US army. These experiences haunt him, giving rise within him to a monstrous second self that he’s trying desperately to control… but just when things seems like they’re on the up, tragic events send Ismaël plunging into the abyss.
———-

Violence. As an immediate response to counter an attack, and to deter future violent acts, it has long been the go-to response of military forces throughout history and across the world. In some circles- mainly criminals and terrorists- it’s the easiest option available to gain immediate respect and cooperation, using the fear of violence to achieve a goal. The drawback to using fear is that eventually it turns into anger. Newton’s Law states, “For every action, there is an equal and opposite reaction.”

Back from his military service in Iraq, Ismael Vasquez is working to overcome the lasting effects left on him by the war. Staying with his sister Maria, and nephew Gabriel, Ismael has been trying to come to terms with a deteriorating physical ailment and the less obvious but no less debilitating psychological scars of PTSD (slight spoiler: there might have been some kind of experimental “super soldier” drug used on Ismael, that may have had- um- side effects). On the surface he’s a happy go lucky kind of guy who stops to chat with his neighbors and loves spending time with young Gabriel. Unfortunately, it’s a show Ismael uses to keep his inner struggle hidden and in check. He very much wants to be “that guy”, but there’s another guy lurking under the surface. That guy revels in the chaos of violence, always reminding Ismael of the things that he’s done, urging him back to that violent mental state.

As if his situation weren’t complicated enough, Ismael is faced with another problem… he left one war behind, but came home to a city that’s plagued by an escalating gang war. One of the two gangs leading the conflict is the same one he was once a member of- the A.Caidos- before enlisting in the Army to leave his past behind. Now that he’s back, they’re looking to recruit their former soldier to take part in the escalating conflict. When Ismael refuses, their response is the phrase “blood in, blood out”, adding that his reluctance to honor that code would have repercussions that could fall back on his family (note: they may have been a little more crude than that). Ismael’s response to that threat is a little more forceful (remember Newton’s Law) than the gang bangers may have been ready for.

After going through some of the titles available from Europe Comics, I’d set a few aside for future perusal. Thankfully, Harden was one of them. It’s a gritty, often brutal action story whose setting is dishearteningly realistic in its portrayal of violence and its lasting effects. First we’re introduced to Ismael Vasquez, military veteran now trying to come to terms with the action he saw while serving in Iraq. His mental state is turbulent at best, and he’s doing his best to maintain control of the disturbing images constantly playing through his mind. Flipping the coin, we’re given a snapshot of a different kind of urban warfare, as rival gangs clash and bodies pile up in the streets. When the two elements come together, Harden really starts to take off.

Joaquim Diaz presents a very broken hero in Ismael. He’s seen and done things that have left him both physically and mentally damaged. He’s coping with the memories as best he can, falling back to his very welcoming and supportive family, but he’s only masking his symptoms instead of dealing with them. It’s pretty telling that this kind of internalization is one of the problems found among many combat veterans. Military training emphasizes the importance of “accomplishing the mission” above all else. When one objective is met, move on to the next, and the next, ad infinitum. If you have a problem, you “suck it up and move on”. On the surface it’s an admirable and necessary mind set, but at its core it’s an impossible balancing act to maintain long term. At some point, the personal problems that have been shuffled to the bottom of the pile will rear up. Diaz handles Ismael’s constant struggle to muzzle the side of him that wants to lash out, to unleash the part of him that reveled in the chaos, to outstanding effect. He knows his material, and uses that knowledge (or experience?) to create an excellent story.

Not leaving any part of his story in the hands of another, Joaquim Diaz pulls double duty as the artist & colorist on Harden. His style is as hard and gritty as the story itself, producing rubble and trash filled backgrounds to go along with the tone set by his writing. His characters show every line, every scar, left behind by a hard and unyielding life. We can see that Ismael has been through the wringer, just as we can see the love he has for his family, and they for him. Diaz brings that same attention to detail to his action sequences, which are quick and very often brutal. No corners cut, no punches pulled, Diaz’s work displays the results of his characters’ actions in stark detail.

I don’t know what else I can say, really. Harden: Sin Piedad is equal parts entertainment and commentary. Joaquim Diaz is using his story to shine a little light on some of the dilemmas faced by society. We need to take the power away from the gangs who believe in their heart and soul that they rule the streets, and we have to do better by our veterans when they leave military service.

I hope this review hasn’t come across as preachy or heavy, because on top of everything Harden is a great read, very much for mature audiences, and I’m looking forward to the next chapter. Thumbs way up! 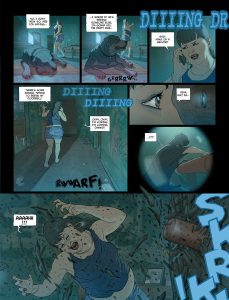 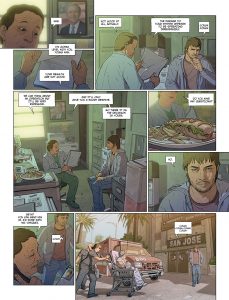 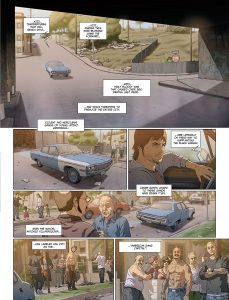