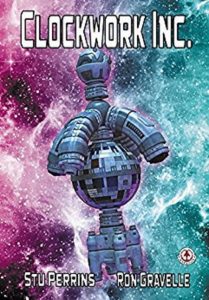 Honest, trustworthy, hardworking. These are just three words that have never been used to describe Roger Hanover. He is a man who sees Black Holes and parallel universes as avenues to make a quick buck rather than gateways into the unknown. Roger soon finds out the hard way that living in multiple time lines isn’t the fun and games he thought it would be.
———-

Roger Hanover was/is/will be kind of an ass…

Gainfully employed with the Transdimensional Cleanup Corps of Clockwork, Inc, Roger’s job is to travel the highways and byways of the multiverse, checking out previously undiscovered black holes and time portals. When he finds them, it’s his job to report ‘em, log ‘em, and fill ‘em up.

I don’t know, with timey wimey space spackle or something, probably…

At some point in his career, Roger figured out that there could be money made in the use and exploitation of unregistered portals into parallel dimensions and alternate timelines- a thing that certain comicbook publishers discovered years ago. For example, it was Hitler’s belief that Germany could have easily won WWII, if only the army had had better boots. Learning this, all Roger has to do is return to his time, purchase large amounts of inexpensive yet quality (for the early 1940’s, anyway) footwear, then head on back and sell them to Germany at a huge profit. Currency must have taken quite a hit in the distant future for that kind of exchange rate to work.

All of this, of course, creates nothing but headaches for Clockwork, Inc., now tasked with cleaning up after their employee’s antics. Enter the inglorious crew of the Hanover Cleanup Operation. It’s their job to respond to emergencies, to ensure that Roger’s cockups are corrected, and to ensure proper flow of the timeline.

Like I said… that Roger guy really was/is/will be a right proper wank.

Stu Perrins has a way with words, which works out very well considering his chosen line of work. In Clockwork, Inc. he’s distilled all of the heavy science of String Theory into a viable, if somewhat irresponsible, money making scheme. In Roger Hanover, he’s created a character not totally lacking in charm, but absolutely bereft of common sense and personal responsibility. In short, Roger is the penultimate man-child who never caught a whiff of the “butterfly affect”. The first chapter of this opening issue came across as being a little choppy, told as it is through an extended third person narrative, but the second chapter makes up for it and things start to move along a little more smoothly. There is the occasional editing slip in my review copy, but in the end everything can be overlooked- or quite possibly fixed prior to the book’s actual release- just because Perrin’s story is kinda fun, in a very Douglas Adams, Doctor Who kind of way.

As for his part in this little play on sci fi tropes, Ron Gravelle handles his business. Gravelle’s use of computer generated figures and backgrounds gives the book a different vibe. I don’t know that I can really put a name to it, but I do know that Gravelle has a better way with it than many. In a lot of 3D artwork I’ve seen, there’s an odd look to the figures… they’re just not quite right, whether it’s in the body positioning, or maybe just an “uncanny valley” twist to the facial features. Gravelle really doesn’t fall into any of those issues, and it gives the book a Heavy Metal Magazine sort of look.

Altogether, the work put into Clockwork, Inc. pays off. It’s a pretty fast moving read that doesn’t pay too much attention to the science but leans on prior forays into the time travel sub-genre of classic science fiction with a loving nod and a wink.

H.G. Wells would have a field day with this one, I’m sure… 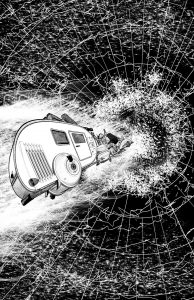 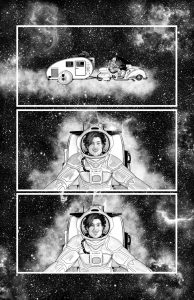 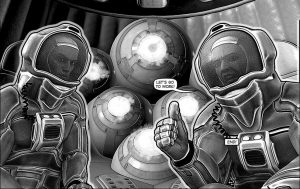