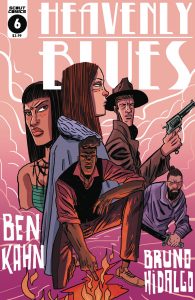 The heist is on! All the plans are in motion, and the die is cast. Isaiah, Erin, and their team will either pull off the biggest theft in history, or face the same failures that doomed them in life. The plan’s simple: cause chaos, steal the Holy Grail, and get out while the getting’s good. If it works, they’ll be resurrected back on Earth. If they fail, they’ll spend eternity in a prison far worse than Hell. Can Isaiah’s schemes and showmanship win the day? Will Erin’s smoldering fury raze the Paradise that spurned her, or burn her out from the inside? And can anyone stop the savage fury of the Archangel Uriel? It all comes to a head here, in the grandest heist the afterlife has ever seen.
———-

Barbiel, an angel dissatisfied with his place in Heaven, needed thieves. Seeing as there aren’t too many of those to be found on his side of the Pearly Gates, he went to the “other place” to find them. Once found and smuggled into Heaven, this band of unruly degenerates was faced with an impossible task: to steal the Holy Grail from the secured vault of the Archangel Uriel… one of the few true warriors left among the Heavenly Host after the war in which Lucifer and his followers were cast out.

An “impossible task” was too tempting a proposition for a group of thieves who just wanted to feel alive, even if only for a short time…

From the time writer Ben Kahn hit me up with a pdf copy of the first issue in March of 2017, Heavenly Blues has held a place of high regard in my heart. The proof of that should be evident in the reviews I’ve written for the title- not so much in the text of the reviews themselves, but in the fact that I’ve written one for all five of the six issue run (six now… if you wanted to check out the other reviews, you can find ’em all right here). I don’t generally do back to back reviews on a title, let alone six issues in a row, because there are a ton of great indie titles out there deserving of the attention. This one, though, I keep coming back to.

More than just a character-driven heist caper, Heavenly Blues poses multiple philosophical “what ifs”. What if Hell were populated more by souls weighted down by personal guilt than by truly evil beings? What if the greatest torture in Hell was found in the mind-numbing boredom with an eternity of the mundane? What if Heaven, every bit as perfect and peaceful as has been promised, wasn’t any better than Hell because of that peaceful perfection? What if a group of misfits and ne’er-do-wells were plucked out of the pits of Hell and smuggled into Heaven to perpetrate the penultimate crime?

All of these are interesting questions by themselves, but Ben Kahn has done more than just toss them out into the air and leave them hanging. He’s introduced as awesome and dysfunctional a group of characters as has ever been written, and left it to them to reflect each of these questions through their actions rather than just verbalizing them. In writing, the maxim “show, don’t tell” allows readers to discover their own truths in a story, instead of simply having everything laid out and spoon fed to them. By tasking his characters with the chore of expressing, through actions and conversations- both present tense and in their backstories- Kahn gives his readers the credit they deserve by allowing them to come to their own conclusions in their own time.

And who are these characters? There’s Amunet, the original “tomb raider” (suck it, Dr. Jones) who had the misfortune of being a woman driven by her need for self-actualization, born in a time when everyone lived at the mercy of self-proclaimed godkings. Ninja master Hideki brought with him unsurpassed skills and abilities in the realms of stealth and infiltration, but was still haunted by visions of the life he left behind, unable to fully let go or move on. Coin Counter, a full on anarchist in life embraced the credo “if it makes you feel good, do it” rather than live out his days as a banker… days surely numbered when he contracted tuberculosis at a young age. One of my personal favorites is Erin, convicted of witchcraft at a tragically young age when in fact she was just one of many who fell victim to irrational fear and hysteria, having the added misfortune of being accused by a man of power in her community.

Finally, there’s the leader of the merry band, bank robbing genius Isaiah Jefferson. Born a black man around the time of the Depression, Isaiah took to robbery like a… I dunno, all the really good comparisons are done to death, so I guess he took to it like a really, really good bank robber. To Isaiah, a heist was a puzzle to be solved, the tougher the better. He felt that if he had to resort to violence to get a job done, he’d failed. When presented with the task of stealing the Holy Grail itself from the vault of one very violent archangel, it was almost enough to pull him in without any thought to reward. Add into the equation the possibility of being admitted into Heaven after several lifetimes in Hell, and his participation was a foregone conclusion.

Over the course of this series’ six-issue run, I’ve had the chance to chat a bit with Ben Kahn about what I really liked about his work. Time after time, it came down to the characters that he’d created. When he sent me the copy for this review, I told him that I was really going miss his group of oddballs. While Kahn reassured me that he did have other projects bouncing around his head, he confessed, “I’m gonna miss them too. They were an absolute joy to write.”

By the way, he made me promise that if I used that quote for the review article, I had to correct a typo… but don’t say anything.

Another item that makes Heavenly Blues stand out, something a little more immediately apparent than good writing and awesome characters, has been the art by Bruno Hidalgo… I really wish I could come up with new things to say about his work, but this is the sixth review I’ve done for the series and I’ve pretty well said all I can say. I will reiterate that while Hidalgo’s style might at first seem a little odd for the subject matter, but when all is said and done it works. It works well. You might look at it and think that it’s a style better suited to a more kid friendly title, being a little more stylized than you’d normally see in an action comicbook. But Hidalgo has done a great job from the start, depicting the different characters in their various environments, and giving each of those environments very distinctive looks through the color palette he uses.

Hey, y’know what I just thought of something… While at its heart Heavenly Blues comes across as more of a philosophical character study, this issue in particular kicks the action loose and kicks it hard. That’s something that we haven’t seen as much of in the five issues leading into the finale, but here it is. Together, with Kahn’s scripting and Hidalgo’s illustration, the action is dynamic and well thought out. We see Jefferson’s plan come together, and I’m gonna go on the record as saying that Ocean’s 11 didn’t do it any better. There are double-crosses, double-double-crosses, thrilling heroics, inappropriate touching, and a battle to the death.

I don’t know what else I can say. If you haven’t checked out Heavenly Blues, I really think you should. And just to put my money where my mouth is, I’m gonna go back and check it all out again from the start. I’ll let you know if I come up with something new to say…