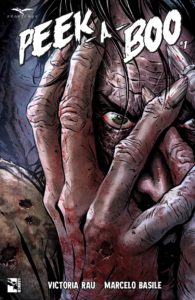 A mother seeking solace with her two teenage children after a recent tragedy signs up for a group hiking and camping tour. But navigating the difficult terrain is the least of the hikers’ worries as the group soon finds they’re being stalked by unseen predators.
———-

Welcome to Peek-a-Boo Gulch, Utah, where the views are grand and the hiking is serious business. But be warned, the trails aren’t to be traveled lightly or without some expert supervision. Like maybe a Navy SEAL or four…

A tour group, ten individuals plus their guide, sets out to tackle the “Peek-a-Boo Loop”. It’s an expert level trail, a distinction well-earned after the disappearance of five hikers just two weeks prior. The tour guide isn’t worried, as he’s convinced the missing five just got lost after striking out on their own, and that they’ll turn up in a day or two. But rest assured, brave reader, if the missing hikers do turn up, it’ll only be… in pieces!

The story by Brusha & Tedesco, written by Victoria Rau, leans heavily on the slasher flicks that always seem to have an audience among those looking for something a little more graphic in their escapism. Rau has summed it all up nicely to make sure that all of the slasher movie prerequisites are represented. The missing five from the beginning of the book were in various stages of undressed tomfoolery when tragedy struck. The second group of eleven, led by their intrepid expert guide consists of the required elements: a single mom and her three kids on a journey of self-discovery and healing; a pair of pampered yuppies; two meathead jocks; one misogynistic redneck and his two sons, one of whom is a terrible disappointment to his father (ie: he seems to be a more or less decent human being).

Okay, I know these are all stereotypes, used and abused over the years to induce varying emotional responses in a reader when inevitable tragedy strikes. That’s only a problem if the end result didn’t turn out to be an entertaining read, a throwback to simpler times. What I read may isn’t blazing new trails over undiscovered ground. It’s a nod to the terrible schlock and awe movies many of us grew up watching when our parents left us unattended. Or for the younger crowd, it’s a spinoff from more recent flicks like Wrong Turn or Bone Tomahawk.

Victoria Rau handles her business, and I’m pretty sure she’s seen most of the movies that I’m talking about. The characters may not be fleshed out beyond their two-dimensional caricatures, with the possible exception of the mom with her three kids, and that’s just fine. In this case, everyone has their jobs to do, roles to fill, and deaths to die horribly.

Said deaths are ably (and bloodily) handled through the artwork of Marcelo Basile. When the action kicks off simplified backgrounds give the impression of enclosed spaces more than open vistas, setting the tone for the horror aspect of the story. When Basile needs his scenery to open up, the panels are full of sunshine, hopes, and dreams. The action is abrupt, brutal, and graphic… not at all for the weak or easily nauseated.

If there’s one area where the book snagged it’s in the characters. There are eleven people here, so not a lot of time to get to know everyone within the confines of a 25 page book. Also, it helps if you remember that a few of these people aren’t going to survive past the first issue, so getting to know everyone might be a bit of a waste… this isn’t a Quentin Tarantino movie with three hours in which to get it all done. Also, some of the character designs are a little close, making it a little tougher to make the quick switches in who’s featured from panel to panel.

My overall impression is that Peek-a-Boo is going to be a fast-paced gore fest, not at all suitable for the youngsters… unless those youngsters are engaging in the time-tested rite of passage of sneaking objectionable material past their parents. That’s a totally different thing. 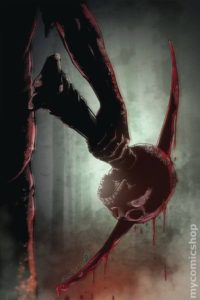 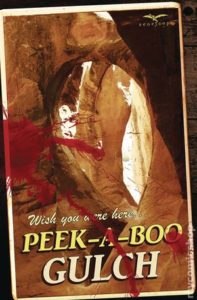