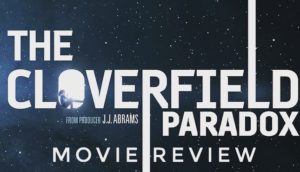 Our resident movie reviewer @caseyjamesss is back with his quick-hit review of the new Netflix movie The Cloverfield Paradox.

“Orbiting a planet on the brink of war, scientists test a device to solve an energy crisis and end up face-to-face with a dark alternate reality.”

Let me start off by saying I don’t think this is a bad movie at all, but is the worst of the three Cloverfield movies we have so far. 10 Cloverfield Lane remains my favorite of the entries and I’m disappointed that Paradox wasn’t at the same level.

After about half-way through the film, it started to suffer from cliché plot points that you see in almost every other story that is set in space. All the acting, visuals, and tone were all fine, except I wasn’t expecting as much humor. Overall the tone worked for me with just an occasional unnecessary joke here and there.

What I really liked about this film, was how connected it was with the first Cloverfield. While 10 Cloverfield Lane was a very good movie, it was unclear if it was a sequel to Cloverfield or if it was even set in the same universe. The Cloverfield Paradox showed us (somewhat) on how the events of Cloverfield happened. It didn’t however, explain enough to leave me satisfied in knowing what exactly that creature was in the first movie. Who knows, we may never even get an explanation of what/why it ended up on Earth, but I can’t help feeling that there is so much missing that needs to be told and Paradox was just a small stepping stone in the larger picture.