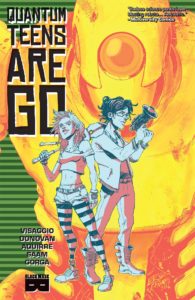 Mad science is the punkest shit there is. Teenage sweethearts Nat & Sumesh spend their nights breaking into abandoned superlabs, stealing parts to build a time machine- and they’ve just found the key component: a cool af tachyonic actuator. But mysterious entities keep trying to stop them from turning it on. Now all they’ve gotta do is hang on long enough to figure out why.
————

In a kinda sorta present day, maybe just a little bit off of center, teenage ne’er-do-wells Nat and Sumesh are in the business of raiding abandoned labs. With science long since abandoned (cuz, like, why bother, am I right?), these raids now represent the rebellious element, and science is only indulged in by the dreamers who refuse to take “meh” for an answer. The discovery of a tachyonic actuator changes everything for the couple, for both better and worse simultaneously.

You know what that means, right? Come on! A fully functioning tachyonic actuator is the key component to an Einstein-Rosen incipient! Okay, well I had no idea what the hell it was either, until Sumesh laid it all out there. Now it’s plain as the nose on your future self’s face, right?

At its core, Quantum Teens Are Go! is at once a throwback adventure in the spirit of the Goonies, and a classic tale of teen rebellion throwing it in the face of the doubters of the world. Nat and Sumesh know exactly what to do when the odds are against them. They point and shout “what in the world is that?” and then when the odds are distracted they kick ’em really hard in the nards.

The writing for Quantum Teens, chaotically handled by Magdalene Visaggio, is sharp, fiery, and without a hint of compromise. Visaggio would almost seem to be a rebellious teen at heart, despite her successes in the comicbook world. This time around, she’s taken a step back from the epic sci fi of Kim & Kim (Pullbox review here), and is playing it a little closer to the here and now. In her world, she’s created a society that’s given up on the idea of looking forward and upward. Scientific advancement is the wheelhouse of society’s rebellious outcasts, rather than the creators of tomorrow. Visaggio has effectively flipped the script, taking the concept of following the status quo to its extreme conclusion.

Visaggio’s work is propelled into vivid visual life by the combined efforts of Eryk Donovan (art) & Claudia Aguirre (colors). The average and ordinary is drawn with crisp lines and bright colors, while the former halls and achievements of scientific advancement are all dull and dingy. Hell, the much touted tachyonic actuator looks more like a rusty old car part than the key to traveling through time. The contrast between what we’ve come to expect “high tech” to look like, and what we’re being shone here further cements the reversal in ideology that’s at the core of Quantum Teens Are Go!

What did I take away from Quantum Teens? This book is about change, in all of its forms, as something to be embraced and approached at full speed, not something to be avoided at all cost or shunned outright. If we aren’t pushing ourselves forward with a dynamic application of will, we’re just treading water… floating in a stagnant pool like a big ol’ glob of algae. 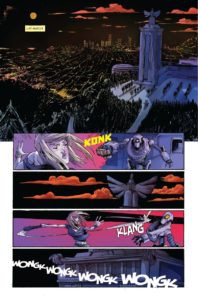 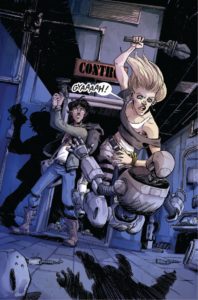 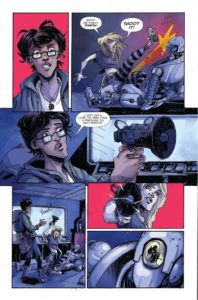 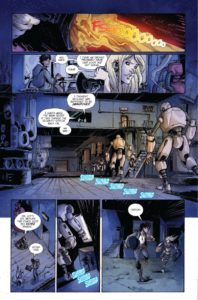 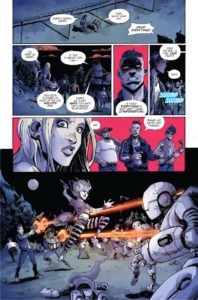 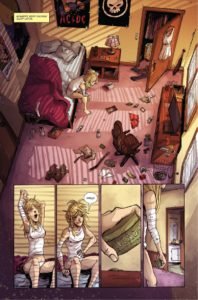 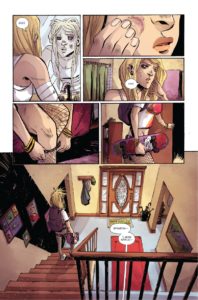 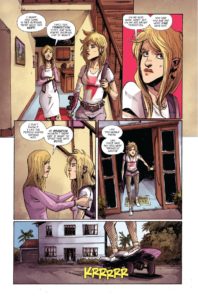