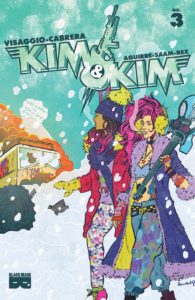 Kim & Kim are twentysomething besties out to make a name for themselves in the wild world of interdimensional cowboy law enforcement. In a massive “screw you” to their parents and the authorities, they decide to hijack some high stakes bounty — and end up in way over their heads. Kim & Kim is a day-glo action adventure that’s bursting with energy and enthusiasm. It puts queer women and trans women front and center, with a story that embraces the absurd alongside realistic pathos.

Blending the punk exuberance of TANK GIRL with the buddy adventure wackiness of SUPERBAD (if Michael Cera was a trans woman and Jonah Hill a queergirl partner in crime), Kim & Kim focuses on the power and meaning of female friendships as engines of validation. A bright, happy, punk rock sci fi adventure that is queer as shit.
———-

If there was ever a book whose creative staff should be tested, maybe not for illegal drug use but for ADHD, this is it. Kim & Kim is an unabashedly, gleefully, unapologetically frantic narrative of quips and innuendo. Also, foul language, so ear muffs, kids. Set in the multidimensional Omniverse (brush up on your string theory, it’s a thing), in some indeterminate future that treats both planet and dimension hopping like a trip to the local burger joint, the first issue introduces us to a pair of ne’er-do-well trouble seeking bounty hunters.

Meet Kimber “Kim D” Dantzler & Kimiko “Kim Q” Quatro, chaos and mayhem incarnate. After a bounty mishap leaves the duo without a payday, they find themselves in a bit of a pickle. They need some cash to pay the bills, and the only opportunity that presents itself is a partnership with Columbus Cross and Saar Harring, fellow bounty hunters on the trail of a high profile fugitive with a (quoting here) “fucking ridiculous” bounty on his head. The twist? The Catalans is the Omniverse’s elite bounty hunter organization run by none other than Furious Quatro, Kim Q’s overbearing (and usually furious) dad.

Of course, Kim & Kim turn the offer down… but that doesn’t mean they can pass up an opportunity. To quote Saar, the bounty is “fucking ridiculous”. Kim & Kim know where the fugitive was last seen, the planet Clovis, so why shouldn’t the pair of free agents take a shot at a payday? In the counter-culture spirit of rebellious youth, the Mistresses of Interdimensional Mayhem take off to make some money, and if it means yanking a rug out from under Kim Q’s dad, that’s just a (very) happy accident.

As all good storytelling involves a premise, a twist, and a reveal, be happy in the knowledge that I haven’t even hinted at half the turns involved in the first three issues of Kim & Kim. Hell, I haven’t even scratched the surface, and to be honest if I wanted to give everything away I wouldn’t even know where to start. As far as opening story arcs go, writer Magdalene Visaggio made damn sure that this one opened up more than it answered, going so far as to script a not-so-subtle hint right into the third issue: “This is absolutely going to bite you in the ass.”

In the realm of epic storytelling, there are those who have a serious message to get across. Others are looking to lay out a narrative that runs at a breakneck pace, toward an epic finale with cosmic ramifications. Still others chose a more introspective route, giving deeply moving character insights so that they may reflect the readers’ own misgivings and doubts about life. Personally, I just had a blast reading the opening adventure of Kim & Kim, and look forward to seeing more.

That’s not to say that there isn’t a message that even an uncultured Philistine such as myself was able to pick up on. It’s there, but it isn’t the kind of thing that’s being used like a club across the back of the head. For some, there will abso-friggin-lutely be larger issues found, deeper connections made. In a conversation between the Kims it’s revealed that Kim Q is trans-gender. It’s also put out there that Kim D might very well be bisexual, but neither of those albeit topical social points of gender identity are what drives this story. They’re simple facts, personal truths for the characters that just exist within the story without being the force behind it.

In the world beautifully brought to life by the team of Magdalene Visaggio, Eva Cabrera, & Claudia Aguirre, gender identity and sexual orientation are just taken as a matter of course. Also, you won’t find any “damsels in distress” within these pages… The Kims don’t need to be rescued by any man, no matter how deep their troubles get. Okay, so maybe Tom Quilt (the mark) does have to put some cash to keep the girls flying, but that money was stolen and Tom’s a polymorphic squid person from Dimension 12, so I’m not sure that really counts.

Taken as a whole, all of this is what makes Kim & Kim an extremely readable story regardless of your personal situation. The message is there, take it or leave it, just so long as you read the damn books. With an artistic style that reminded me of books like Scott Pilgrim, and an attitude that does for science fiction what Rat Queens did for high fantasy, Kim & Kim is as entertaining a read as you could hope to get your grubby mitts on. If you’re jonesing for a fix of sci fi action and adventure, step right up and take a gander at these LMD’s (Ladies of Mass Destruction). If you don’t, Kim Q might just wind up at your door wanting to know why the hell not. You don’t want that.

But, um, if she does show up, you might wanna make sure the liquor cabinet is locked up tight. 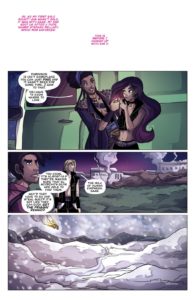 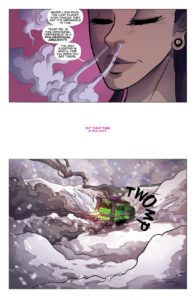 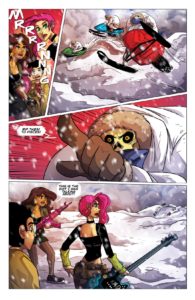