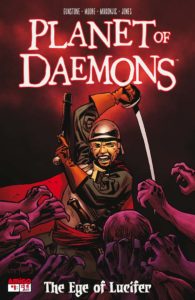 Planet of Daemons: The Eye of Lucifer #1 (of 4)
Amigo Comics
Written by Kevin Gunstone
Art by Paul Moore
Colors by Stefan Mrkonjic

Amigo Comics are proud to announce the September 2016 launch of PLANET OF DAEMONS, a bewitching miniseries of occult adventure created by the British creative team of Kevin Gunstone and Paul Moore.

Set in the arcane realm of the Qliphoth and 17th century New England, PLANET OF DAEMONS follows the fortunes of Amos Deathridge, a former Puritan magistrate who now serves as jailer of the daemons and evil spirits who cast their sinister influence over mankind.

In a compelling first storyline, The Eye of Lucifer, Amos arrives on the world of Sathariel pursuing a daemon of war. But on his journey Amos encounters the hatching of a Succubus Queen – whose reincarnated soul shares a mysterious connection to his past. To solve the riddle of her identity, Amos must enter Sathariel’s labyrinth and confront the truth behind his arrival in the Qliphoth years earlier…
———-

Puritan magistrate Amos Deathridge is a man with a mission. Formerly dedicated to exposing witchcraft in all its evil forms among the people of Ipswich, Massachusetts, he now finds himself patrolling the Qliphoth, the hidden realms beyond our own. There, he defends our world against the daemonic forces that would infest it and take it. He’s not alone, partnered with Baron Aubert, a Templar Knight betrayed by his order and banished to Sathariel, the third sphere of the Qliphoth. Now, Amos races to the encampment he shares with Aubert. He hasn’t heard from the knight in a while, and fears for his safety.

The fears are well-founded, as he arrives at the camp to find Aubert’s corpse. Needing to find out about the events leading to Aubert’s death, Amos invokes holy magic to call Aubert’s spirit back to his dead body. In the conversation that follows, Amos discovers that a daemon dedicated to inciting conflict and war used Aubert as a sacrifice to further his goals. Amos also finds out that a new power is being born in Sathariel. With that knowledge, Amos sets out to investigate this creature, to find out what sort of beast would take up residence in the Palace of Lilith.

Fans of supernatural and pulp horror might want to give Planet of Daemons a look. This inaugural issue reminded me of some of the classics like Solomon Kane and Prince Valiant. The writing looks like it could’ve come straight out of ye Olde World, and the artwork is very reminiscent of some of the swashbuckling adventures that came out of the sixties and seventies.

So far, it’s not totally clear about what the overall storyline is going to look like, but as an introduction to protagonist Amos Deathridge, the first issue did its job. I was impressed with the research done, both for the language and the setting. After doing some digging, I found out that the Qliphoth and its spheres are taken from Jewish Kabbalistic lore. Not content with just setting the story in some generic circle of Hell or other demonic dimension, Kevin Gunstone and Paul Moore have created a barren landscape out of existing mystical and religious texts.

If it’s a supernatural throwback you’re looking for, Planet of Daemons from Amigo Comics isn’t going to be a bad option. It’s got holy paladins taking the battle to the forces of evil, not just standing around waiting for them to show up in Massachusetts. What twisted series of events brought Amos Deathridge to Sathariel, and what daemonic horror is waiting for him in the Palace of Lilith are answers for future issues… 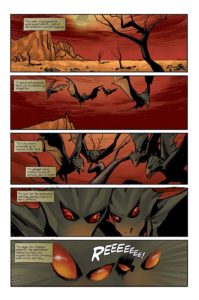 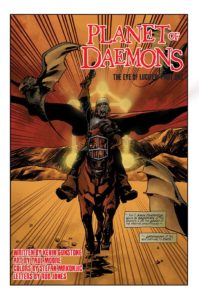 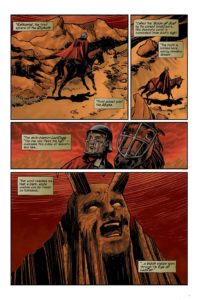 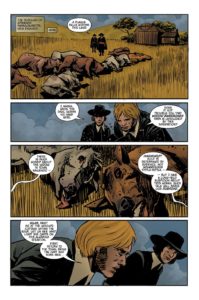