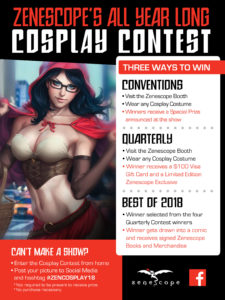 Horsham, PA – Comic book publishing house, Zenescope Entertainment, has announced plans to kick off a year-long Cosplay Contest during the company’s appearance at the 2018 Emerald City Comic Con. This is the company’s seventh time exhibiting at the popular Seattle-based convention that takes place annually at Washington State Convention and Trade Center.

Emerald City attendees can enter the cosplay competition throughout the convention weekend by heading to Zenescope booth #1913 in costume where they’ll have their picture taken and posted to Zenescope’s Facebook page. The cosplayer with the most “likes” will be named the Emerald City winner and receive a special prize to be announced during the convention weekend.  All entrants will also be automatically entered into Zenescope’s quarterly Cosplay contest. Quarterly winners will receive a $100 Visa gift card and a limited edition Zenescope Exclusive comic book.  Finally, the four quarterly contest winners will compete for the 2018 grand prize which includes being drawn into a Zenescope comic book as well as limited edition Zenescope merchandise.

Zenescope is also giving those unable to attend the convention an opportunity to enter the contest from home.  Entrants who post a photo of their cosplay on Instagram, Twitter, or Facebook with the hashtag #ZenCosplay18 will have their photo shared on the Zenescope Facebook page to enter the competition.

ZENESCOPE
Joe Brusha and Ralph Tedesco started out writing screenplays together about fifteen years ago but the two eventually came up with the idea that evolved into Zenescope Entertainment. The company was founded in 2005 and has become one of the most recognized independent comic book and graphic novel publishers in the world. Ralph and Joe’s edgy and non-traditional brand of story-telling sets them apart from the pack. Zenescope’s Grimm Fairy Tales and subsequent spinoff series such as Oz, Wonderland, Neverland and Robyn Hood, which re-imagine classic fables, are some of the best-selling and longest-running original independent comic books on shelves today. Zenescope publishes and develops both original and licensed material and has worked with dozens of clients that include Discovery Channel, History Channel, CBS, Lionsgate TV, Mandalay Vision, New Line Cinema, Titmouse Studios and many others.

Zenescope Entertainment has brought an exciting new feel to comics and are proud to have such a devoted fan base coming along for the ride.