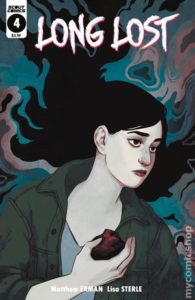 Stranger Things meets Ghost World in Long Lost, the haunting story of two estranged sisters who find themselves drawn back to their small southern hometown to unlock the disturbing mysteries that are hidden there, with all roads leading back to their enigmatic, secretive mother. Join Scout Comics as they proudly debut this compelling, harrowing journey through family relationships, childhood trauma, and southern gothic horror.
———-

“This is a story about my home. However boring, normal, and gruesome it is.”

With this sentence, unassuming and non-threatening at first glance, the type of story being told in Long Lost is pretty well summed up. Sisters Piper and Frances have come together after a prolonged estrangement, to deal with the sudden disappearance of their mother. Meanwhile, their sleepy little home town of Hazel Patch moves on around them, seemingly as oblivious to their activities as the sisters are to it. Things change when, during a meeting with their aunt Jody, this slow burn of a story kicks over a rock to reveal the creepy crawly things that had been, up to now, hidden.

Matthew Erman and Lisa Sterle have done something that I’ve found to be pretty rare in the comicbook format. They’ve crafted an effectively subtle horror story that isn’t dependent on axe wielding murderers wearing masks of human skin jumping out of darkened cellar doors. It’s something that I’ve seen attempted often, but seldom achieved to this degree.

Erman’s writing helps greatly with this slowly building tale of family reunions and small town secrets. The danger of attempting to put together a comicbook with this kind of pace is that readers are often too impatient to stick with it to the reveal. In this case, however, the narrative does a good job of pulling the reader along with Piper and Frances, as they reminisce over childhood memories and try to recapture some of the familiarity usually shared by siblings. In their case, the sisters had been separated by distance, both physically and emotionally. Piper ran away from home in her teens, leaving the younger Frances behind with their troubled mother. What form this “trouble” took has yet to be revealed, but in Frances’s own words, “Mom has been missing since we were kids. It’s only now that she has finally disappeared.” It’s in that pair of sentences and its simple contradiction that we’re teased along with just a taste of what we might learn next.

Backing up Erman’s work, I don’t think I can really say enough about Lisa Sterle’s part in this whole glorious mess. Her panels are a good mix of close ups and long shots, and I think it’s in those larger pictures that she’s contributed most substantially to the title’s tone. Much of this issue is spent following along with the girls as they walk through their sleepy little town, on the way to meet their aunt Jody for breakfast. Now, as you read this book, listen to the hints given in the sisters’ shared recollections of childhood, but make sure that you’re paying attention to what’s going on in the background at any given time: A pack of dogs tearing at something that looks a lot like a cat or other smaller animal; a line full of presumably fresh laundered clothes swinging in the breeze as the girls pass by, covered in unidentified yet oddly disturbing stains. These are just a couple examples I can name, and I’m gonna leave it at that, lest I spoil all of the hard work Lisa Serle has put into this book.

Horror stories in comics all-too often tend to resort to shock and awe, instead of taking a more measured approach. That type of story has its place and can be great, but Erman and Serle have skipped over the much easier and more traveled road, choosing instead to have a little more faith in the reader. You might have to work a little harder to see where this title is going, to root out the (so far) very subtle presence of the dark and sinister, but I don’t think you’d be disappointed once you do.

Unless you’re one of those readers looking for an easy fix for gratuitous -insert wanton gratuity of choice here-… You’re not, are you?

Sadly, I didn’t have any preview pages to show, but I did scalp a few images from the Long Lost Facebook page, just to showcase some of the great work Sterle’s been doing… 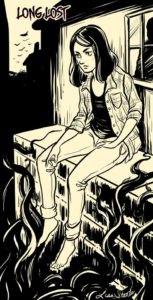 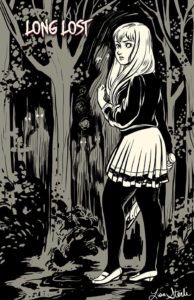 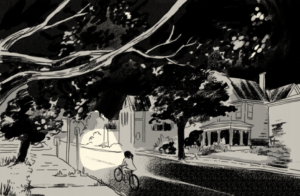 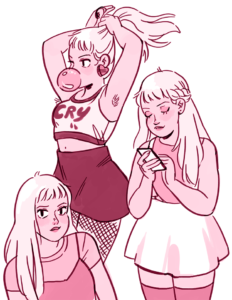 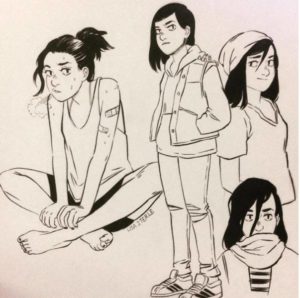