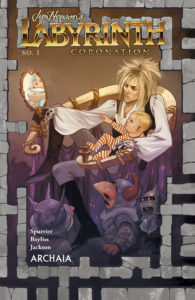 Secret Origins of Jareth Stardust and the Spiders from Mars

Does the Labyrinth prequel get lost?

Long story short: Some key members of Archaia’s Henson Team come together to tell the secret story of how Jareth the Goblin King became the antagonist of your favorite film that you probably haven’t seen recently enough to realize how problematic some of it is.

Not looking for a fight, folks, but let’s have some real talk: Henson’s “The Labyrinth” hasn’t aged as well as you remember it. Don’t get me wrong. I love this film. It was formative for me. It’s a fantastic, beautiful piece of storytelling and weird and wacky puppetry, yes. And it was created by masters of their trades, including the affable David Bowie, without whom, let’s be honest, the film would just be mediocre. Anyone who thinks this film holds up need only watch the animated owl in the title sequence again to realize that their argument is invalid.

That being said, the first of the twelve-part “prequel” to the film being published by Archaia /Boom Studios is pretty great.  It’s a long overdue return to the Labyrinth Extended Universe.

The good news — no the great news — is that the writer Simon Spurrier and artist Daniel Bayliss seem to labor under no illusions that the source material for their prequel is serious, holy work. The writing team manages to bring readers into an exploration of the world of the Labyrinth that maintains its severe and rather dark overtone without losing sight of the fact that, at its heart, Labyrinth is a movie that has an extended scene involving farting rocks.

That is to say, the writing team manages to maintain a playful tone while regaling readers with the secret dark origin of the Goblin King. This is a significant coup. The story, in as much as it is set up in this first issue of 12, is playful, reverential, and respectful of the canon at play. It is as good a return to the Labyrinth as any fandom can rightly expect.

Archaia has consistently and continually done well with the Henson licenses it holds, and its treatment of the Laybrythn franchise is respectful and exciting. It also shows a scholarly understanding of the source material unclouded by nostalgic reverence.

The art is good. There are a plethora of covers. The demons and dwarves and goblins are rendered in muppety goodness. If you are a fan, you should read this. If you are unfamiliar with the film, you should still read this– although, you might want to get the Wikipedia entry for the film preloaded.

Either way, it’s a good start. We may find our way to the center of this one yet. 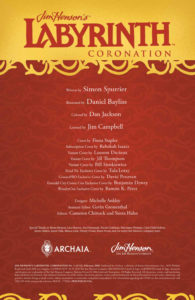 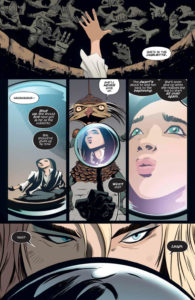 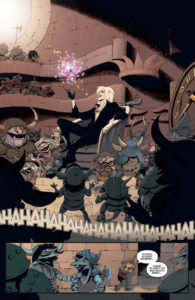 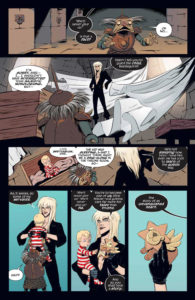 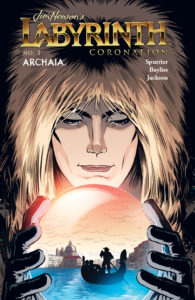 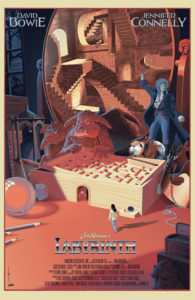 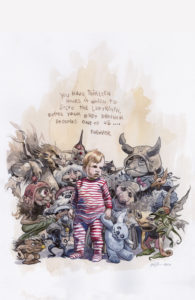 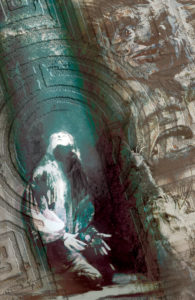