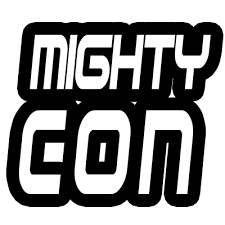 I really wasn’t sure what to expect driving into Milwaukee on Saturday morning. Was Mighty Con: Milwaukee going to just a few vendor tables and some select local artists? Were the attendees going to be all the grizzled nerds with their pull carts stack with long boxes complaining about the teen cosplayers getting in his way? What was this con going to be like?

I’m happy to report that is was none of those things! Although I did see the grizzled guy a few times. 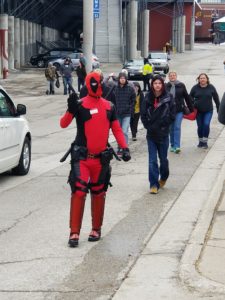 We hit Wisconsin’s State Fair Park about 10:30, I had my teenage daughter and her BFF along with me. It was their first comic con.  After we parked it was a short walk to the pavilion where the con was housed. We were met with one of the longest lines I’ve ever stood in to enter a comic con. We qued for about 30-minutes, wishing we had grabbed our as we shivered under the 38-degree breezy Wisconsin sky (38-degrees in February is actually unseasonably warm for WI).  As I was playing the good dad any blocking the wind with my body for my daughter, I was stunned as I saw the turnout.  The number of people I saw waiting line was astonishing for a “small” con. The line grew a solid 50-yards from where we started as we moved along.

What did I see in the line? Nerds of all kinds! Comic nerds with their backpacks and hand-written checklist at the ready to dive into long boxes. Cosplayers making last-minute adjustments as they shuffled through frigid temps, begging it not to rain on their handmaid costumes and apparel. I heard conversations about how people loved/hated Thor: Ragnarok and ongoing Marvel v. DC debate.  There was one young man who professed his love for the artistic stylings of Rob Liefeld, he was dragged off to the near-by livestock pavilion and never heard from again.

THIS was a full-fledged comic con!!! 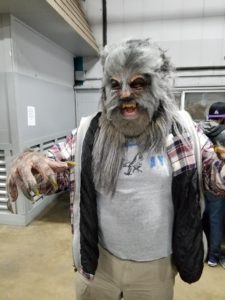 Upon entering the building, and getting the instant rush of heat that flows into your extremities, I saw exactly what you would expect from a large convention.  Vendors with comics, toys, statues, and giant movie posters were spread out from one end of the building to the other. The banners of artists and small press/independent comics popped up as beacons for those of us to search for comic gems outside of the mainstream publishers. Finally, there were people, LOTS of people.  So many people that realized the guy cosplaying as the fire marshall was not actually cosplaying…..he WAS the fire marshall keeping an eye to make sure the crowd density stayed within safe limits.  Fair warning: do not try to take a picture of the fire marshall while he’s doing his job.

Walking around there were some creators that caught my eye. We’ll have some full reviews of the comics in the future, but for now, I’ll just direct you to their pages.

Jordan Gunderson: Jordan Gunderson, a freelance illustrator/artist, lives in south-central Wisconsin, and longtime friend of ThePullbox.  Jordan’s work has been featured in a number of publications including Aspen Comics, Dynamite Entertainment, BOOM Studios and Zenescope. Fans of Aspen Comics will recognize Jordan’s talents with his multiple arc run in Executive Assistant: Assassins, as well as illustrating the Fathom Annual, The Four Points, and Aspen Universe: Revelations. Jordan’s latest project partners him with the talented X-Men writer Scott Lobdell Marvel’s Uncanny X-Men and DC’s Red Hood and the Outlaws, creating a brand new series for Aspen Comics titled, No World.

Look for Jordan at https://www.facebook.com/TheArtOfJordanGunderson/

Beth Zwolski Tobais (a.k.a. The Chalk Girl):  We’ve sung Beth’s praises on this site before for her amazing work at Wizard World shows. Beth and her husband have been chalking up Six Flags since 2010 and have taken their talents into the convention space. Selling high-quality prints of various sizes you’ll be able to take some of Chalk Girl’s famous works home with you.

Head over to https://www.adventuresofchalkgirl.com/ to see her awesomeness 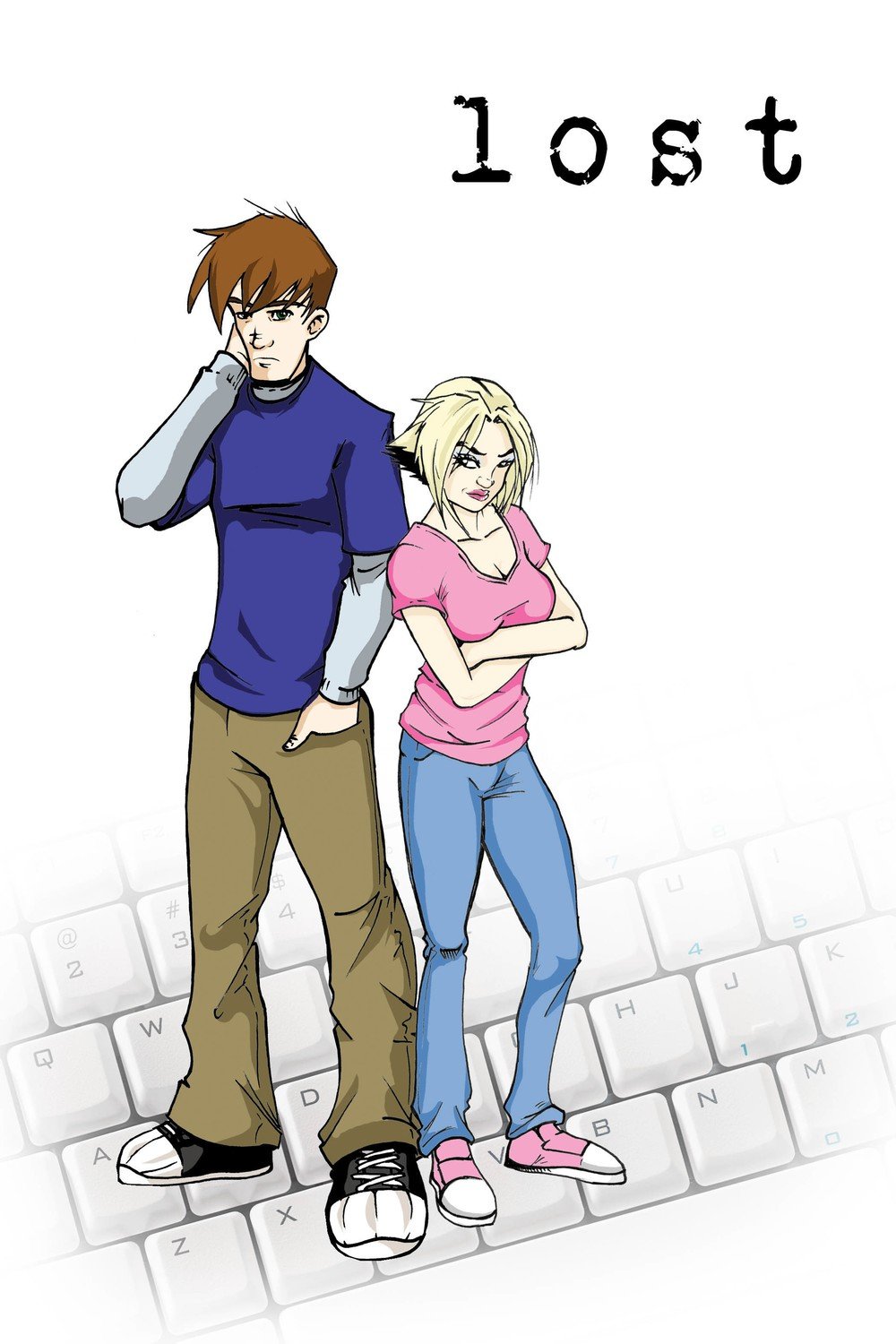 Jaysin Osterkamp: Jaysin is one of those multi-talented creators who have his hands in graphic novels, daily webcomics, and film.  What caught my eye at his booth was his graphic novel Lost.  More on this in the future. In the meantime, you can check out is webcomic Half Hearted Headache at www.halfheartedheadache.com

Erin Mehlos: Erin is an Eisner-Nominated comic artist who has a weekly webcomic called Next Town Over. Described to me as a fantasy western, “Next Town Over is a weekly western, liberally spiced with sorcery, secrets, and steam, updating Sundays.  It primarily chronicles the curious rivalry twixt laconic, mechanically-inclined Vane Black and sorcerous rogue John Henry Hunter … and no: it most certainly does not take place in the historical American West.”

Ride to www.nexttownover.net to take a gander

Kimberlee Ann Bastian: Possibly the best booth I stopped by at Might Con was that of Kimberlee Ann Bastian, historian, and novelist.  The booth was eye-catching as it was done in a 1930’s esque visual and it drew me in to see not a comic, not an artist, but a novel. Fancy that, a novel at a comic book convention, a rare site, but not unheard of. Ms. Bastian was quick to see my interests and goes into detail of the research she did for her travelers’ tale. The Element Odysseys: The Breedling & The City in the Garden, and the second novel The Breedling & the Trickster, describe in detail locations and situations found in upper midwest during the early 20th-Century, all while straddling the realms of fantasy and realism.

This one jumped out at me as something I want to take a look at.

You can find The Element Odyssey books at https://squareup.com/store/elementodysseys

You can follow the adventures of author Kimberlee Ann Bastian at http://kimberleebastian.wixsite.com/elementodysseys

That brings me to a close for coverage of Might Con: Milwaukee 2018.  I suggest taking a look at www.mightcon.com for their upcoming shows and set the dates on your calendars, I know I will. 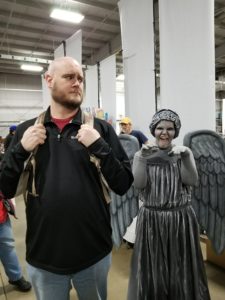 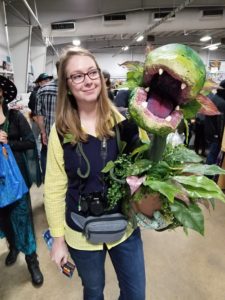 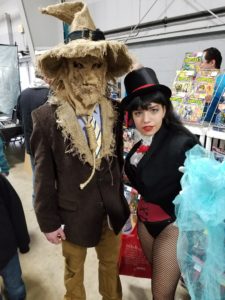 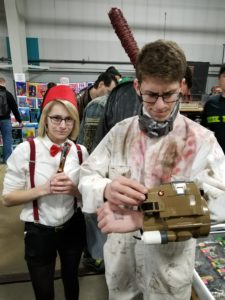 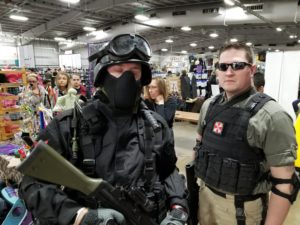 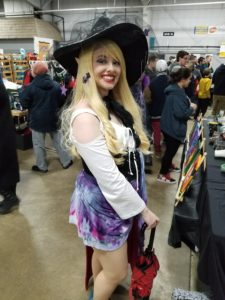 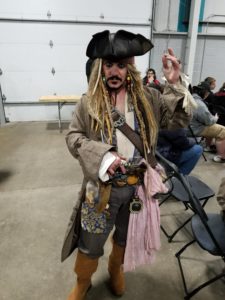 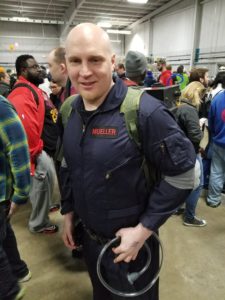